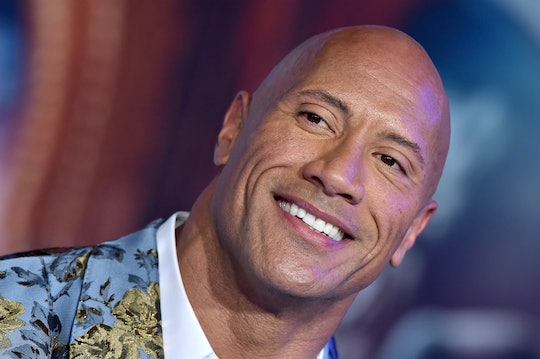 Raise your hand if you love your "Sexiest Man Alive" to come with a side of self-deprecating humor. If so, you're going to love Dwayne "The Rock" Johnson's childhood photo that he shared on Instagram on Thursday. There's a lot to unpack here, but mostly you just have to appreciate a celebrity who doesn't mind poking fun at himself a little. Or poking fun at a 7-year-old version of himself.

The Jumanji: Welcome To The Jungle star proudly displayed his throwback photo from 41 years ago, when he was just a sweet little boy growing up in Hawaii and, from the looks of his grin, just having the time of his life. Unaware at the time that he would grow up to be the highest paid male actor on the planet as of 2020, according to the BBC, or that he would be named People's "Sexiest Man Alive" in 2016. Something the father of four girls noted himself when he wrote the hilarious caption of this amazing photo.

"Throwback to 7 years old in Hawaii, and just drippin’ cool with my buck teeth, aloha shirt and WTF is going on with my afro matted down on one side!? No way this stud doesn’t grow up to become Sexiest Man Alive," he wrote.

I think he's being overly harsh, especially about his cute little "buck teeth," but you be the judge.

Johnson has long been aware that his sense of humor is one of the sexier things about him. As he told People in 2016 when asked what makes him sexy, "Ah, a sense of humor. And I think probably just not trying to be sexy and just being cool and confident in your movies."

That confidence might have started at a young age. He did show up for picture day with an "afro matted down on one side" and wearing a Hawaiian shirt in browns and golds, after all. That takes gumption, pal.