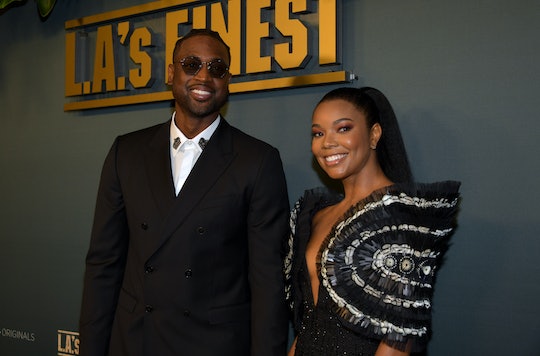 Here's the thing about being a parent; you are always supposed to be in your kid's corner. That's kind of your job. Even if your kid is having a rough time, feeling dejected and down and out and wrong-footed in all sorts of ways, none of those feelings should ever emanate from you. You are their safe harbor, no matter what. And I can tell you one dad who understands this deep down in his bones; Miami Heat star Dwayne Wade. He's there for his kids in a very real way. And Dwayne Wade's comments about supporting his son at Miami's Pride Parade act as an important reminder that this is exactly what we're all supposed to do for each other.

Wade wasn't able to be on hand when his 12-year-old son Zion went to Miami's Gay Pride Parade with his older brother Zaire and his stepmother, Gabrielle Union Wade, back in April. He was in Toronto, Canada playing basketball with his teammates. But that didn't stop him from making sure his son knew he was in his corner as much as the rest of the family. At the time he shared a message for his son on his Instagram Story that read, as per USA Today, that read, "We support each other wide pride!"

Judging from the pictures Union shared on her own Instagram, Zion looked like he was having an absolute ball. Because perhaps that's what happens when you have a loving family who supports you. In the months since, Wade hasn't said much about Zion's day at the Miami Pride Parade. On Tuesday he opened up at the Cannes Lions advertising festival in the south of France... and his words were powerful. Wade told Variety:

I don’t really talk about it much because it’s Zion’s story to tell. I think as a family, we should support each other. That’s our job. And my job as a father is to facilitate their lives and to support them and be behind them in whatever they want to do.

Wade and Union, who are also parents to the sassiest baby on the internet, 8-month-old daughter Kaavia James, are clearly in Zion's corner. But that doesn't mean Wade wants kudos for doing something he figures parents should be doing no matter what, as he told Variety:

I’m very uneasy about accolades that come from supporting my kids or the negativity that comes from it. I’m doing what every parent has to do. Once you bring kids into this world, you become unselfish. It’s my job to be their role model, to be their voice in my kids’ lives, to let them know you can conquer the world. So, go and be your amazing self and we’re going to sit back and just love you.

Dwayne Wade is a parent who actually really gets parenting, I think. He loves each of his kids for exactly who they are and, as he explained in that same interview, thinks parents should actually "get to know" their kids instead of putting "your wants and needs on them."

Would that every kid out there had the same kind of unassuming, all-encompassing support from their parents.

More Like This
Prince George Reportedly Got Sassy In A Fight With A Classmate
Can Elderberry Help Prevent Illness In Kids? Doctors Weigh In
Post Malone Shared A Bunch Of Sweet & Candid Details About Life With His 4-Month-Old Daughter
Mila Kunis & Ashton Kutcher Reveal They Have An Open-Door Bathroom Policy