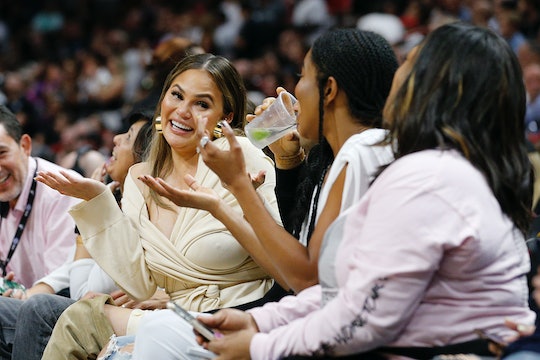 Have you ever met one of those people who always seems to be embroiled in shenanigans? If you have access to the internet, you definitely have and her name is Chrissy Teigen. The social media queen is just such a person. Strange turns of events happen around her all the time and she is just so relaxed about it that it truly seems like not a big deal at all. Like earlier this week when NBA player Dwyane Wade fell into Chrissy Teigen and John Legend during a basketball game. Not only were both Teigen and Legend super chill about the whole thing, Twitter was all over it.

It seems Teigen and Legend were on hand to cheer on the sidelines in Miami, Florida, as the Miami Heat was playing against the Philadelphia 76ers on Tuesday, according to the Daily Mail. Wade, who is married to actress Gabrielle Union, is also point guard for the Miami Heat.

During the game things went a little outside the lines, as it were, and he found himself getting super close and personal with fans who have those coveted court side seats. Like, real up close and personal. Almost in their laps. And naturally, the two fans who ended up having Wade fall into them were, yup, Chrissy Teigen and John Legend.

The whole thing was captured on camera, and the Cravings: Hungry For More author herself clearly considered it a sight to behold. A "renaissance painting" even, as she wrote on Twitter.

Social media users on Twitter picked up on the concept of this picture as a renaissance painting and ran with it. Admittedly, the image of Wade focused solely on the ball as Teigen and Legend hilariously grimace in the background does have a certain je ne sais quoi.

Now here is the image re-imagined as some of the great art works from the renaissance period.

A new masterpiece by Vincent Van Gogh featuring Wade, Teigen, and Legend. Just as he would have wanted it, I'm sure.

Beyond the renaissance aspect there were plenty of people who saw a beautiful opportunity to create a new meme out of this shot of three massive celebrities in an awkward position.

Not everyone reacted to this amazing shot and thought of it as artwork or the latest meme, however. At least one person named John Legend was simply happy that he was able to salvage something terribly important to him in that moment.

His drink. Although most of it was all over his face.

Beyond the whole falling on Chrissy Teigen and John Legend thing, this was actually a big night for Dwyane Wade. It was his last night playing for the Miami Heat before retiring, according to CBS Sports, and not only did his team win 122-99 but he also managed to become a meme on his last night.

That's what comes from being in close proximity to Chrissy Teigen, I guess. You're always a meme waiting to happen.