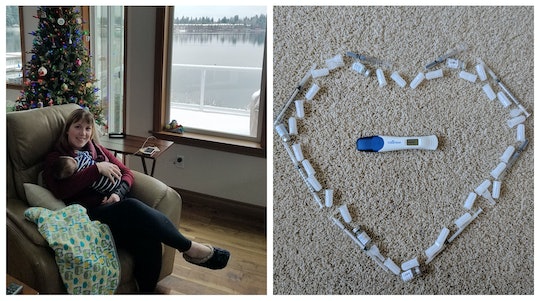 Before The Flutters, Worry In Early Pregnancy

I have no problem admitting I’m a pee-on-a-stick addict. Going through infertility treatments makes you hyper aware of your own body and many of us realize that we are pregnant very early on. It’s not just people going through treatments either — there are others that just “know” way before their period is due to arrive. But with this knowledge comes its own set of issues.

And the feelings of obsession can be even worse for those who have had prior miscarriages: after a loss, the stakes can be high, as Ashleigh Johnson knows.

During the two-week wait that resulted in her son, now 3, she had felt definite signs of being pregnant, but with her current pregnancy, she didn't feel anything, which led her to assume the worst.

“It’s tough knowing so soon and really not being able to tell anyone as badly as you want to,” Johnson says, “We did tell our family right away because they knew we were going through IVF. When you find out at six or eight weeks, it’s not as long of a wait to tell people, since a lot of people announce at 12 weeks.”

Pregnancy is measured from the last period, rather than the date of ovulation, which means that people actually "conceive" at about two weeks of pregnancy — and the time between the earliest point of detection and the time people would otherwise figure out they are pregnant is its own paradigm in worry.

The rate of miscarriage drops steeply between the point cardiac activity can be detected in the embryo, at around five-and-a-half to six weeks of gestation and the weeks following (a prospective study published in the American Journal of Epidemiology saw a 5 percent risk at five weeks, which dropped sharply with gestational age to 2.5 percent at seven weeks and below 1 percent after week 13).

So it is different knowing you’re pregnant at four weeks, or earlier, versus finding out at eight. That’s an extra month knowing someone is in there and worrying if you’ll be holding them in your arms months down the road.

“All infertility patients know that the two-week wait is absolute agony,” Becky Christiansen explains to Romper. “I had been telling myself over the past two weeks that my symptoms didn't necessarily mean I was pregnant. They were totally different from my first pregnancy, so as a defense mechanism, I told myself that it wasn't necessarily a sign I was pregnant.”

It was hard right away for Christiansen. Her mom, and two friends knew exactly where she was in her cycle, so they found out within days.

“I was barely four weeks pregnant. Was I crazy to tell people so early? Most people don't even know they’re pregnant before six weeks," says Christiansen, "But I did not want to go through that alone. While I have been lucky enough to never have had a miscarriage, I was terrified. Every twinge, every symptom, everything I felt made me nervous. I studied my toilet paper obsessively to make sure I wasn't spotting.”

A chemical pregnancy is considered a very early miscarriage, one that can’t yet be detected on ultrasound and can only be confirmed through blood tests. Many times, the only way a woman even knows she was pregnant was a home pregnancy test whose lines gradually started fading. Chemical pregnancies are a very real fear in those really early weeks. Throw in someone who has spent thousands of dollars on fertility treatments and that wait can be unbearable.

Sasha, who asked to be identified by her first name only, knows all too well that finding out really early, can bring about a lot of stress. She tells Romper she was at the gym one day and wasn’t able to complete her workout due to feeling lightheaded and nauseous. She took a pregnancy test when she returned home and it was positive.

My first appointment was labeled as a ‘threatened abortion.’

She went to her doctor to confirm her pregnancy the next day at three weeks and six days after ovulation. Unfortunately, her blood levels came back low.

“That’s when my heart broke. We finally get pregnant again and the doctor was telling us to prepare for a miscarriage,” she says. “My first appointment was labeled as a ‘threatened abortion.’”

Luckily, her daughter, strong and determined, defied the odds and was born at 38 weeks.

“Honestly, it's nice knowing you’re pregnant early, but on the other hand, if you don't find out until eight weeks you miss most of the stress and worry of having a miscarriage. Usually if you make it to eight weeks without a miscarriage you’re good. Most of the time,” she adds.

Many women who have gone through struggles to have a baby are understandably hesitant to share their news. Sabrina, who asked to be identified by her first name only, has a son thanks to an egg donor. Cancer treatments as a child left her unable to use her own eggs, so her and her husband knew donor eggs were the route they would take to have a baby.

I did love finding out earlier than most people, because seeing my son as an embryo was truly magical.

“The two-week wait was absolute killer for me. I decided to do a couple home pregnancy tests, and did not tell my husband,” she says, “I decided I needed to prepare myself for bad news in case that’s what we would be getting.”

She took tests at varying times of day and saw a faint line every time.

“I began over analyzing them thinking my eyes were seeing something that wasn’t there, so I texted a couple people — yes, not even my husband though! — and they saw lines as well.”

Even though Sabrina’s blood work and ultrasounds continued to confirm her pregnancy, she couldn’t relax and truly believe it until her son was born.

“I did love finding out earlier than most people, because seeing my son as an embryo was truly magical," she explains, "That’s a gift that only people who have gone through IVF get to see, and while we’re going through IVF for less than ideal situations or reasons, that’s one huge positive that I took from it."

Johnson was nervous for her upcoming cycle because her and her husband had had a miscarriage earlier in the year and an IVF cycle that failed back in 2017.

“The two-week wait this time was horrible,” she explains, “I was a mess of emotions and praying it would work this time, because we basically felt it was going to be the last round we could do or afford.”