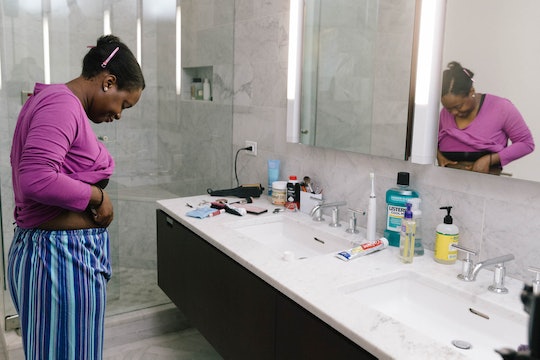 When I was trying to conceive (TTC) one of the most irritating parts was playing the PMS or pregnancy symptom game after every fertile period. Did it finally work? Was this the one? And I know I’m not alone in feeling that way. Like many things for women, it’s nature’s cruel joke to make PMS symptoms the same as early pregnancy symptoms. But is there any way to tell the difference between early pregnancy signs versus PMS? I asked Dr. Idries Abdur-Rahman, an OB-GYN and medical travel blogger for TwinDoctorsTV, to shed some light and potentially help us out when determining whether it’s PMS or pregnancy when you’re feeling bloated, crampy, nauseous, and tired. (Not to mention the sore boobs, headache, and lower back pain.)

He says that honestly, it all depends on timing and severity. “PMS symptoms tend to start a few days after you ovulate, so about 10 to 14 days before your next period should start,” Abdur-Rahman explains in an email interview with Romper. “Pregnancy-related symptoms start later, because while fertilization of an egg occurs around the time of ovulation (when PMS symptoms begin), a growing embryo (baby) does not enter the uterus until five to seven days after you ovulate, and the hormones that cause a lot of the early pregnancy symptoms don't enter the bloodstream in meaningful levels until a few days after that.” So early pregnancy symptoms start a few days before your expected period.

I sure wish I had known this when I was struggling with TTC and getting my hopes up every single month. Those cramps threw me off every single time. So how can you tell the difference between PMS cramps and implantation cramps? Abdur-Rahman says PMS cramps are more severe than early pregnancy cramping, but the bloating is more severe in early pregnancy than PMS. “So more cramping and less bloating is more likely to be PMS while milder cramping with more bloating is likely to be early pregnancy related.” When does implantation occur? Avawomen.com noted that implantation can happen anytime between six to 12 days past ovulation (DPO). But the vast majority of the time implantation occurs between eight to 10 DPO, according to the website.

“In terms of severity, PMS symptoms are usually more severe than early pregnancy-related symptoms and they will get better as you approach your period, while early pregnancy symptoms actually worsen as time goes on,” Abdur-Rahman adds.

What causes all of these similar symptoms anyway? Abdur-Rahman says they’re caused by fluctuating hormone levels and “increasing levels of prostaglandins (substances that act like hormones and can stimulate inflammation).”

Unfortunately, it’s pretty hard to tell whether your symptoms are PMS or pregnancy-related. It all depends on timing and severity. So if you’re logging your time in an app or charting your ovulation, just count out where you are in your cycle when you start having symptoms, and note how severe they are (or aren’t) and if they get worse or better over time. Fingers crossed, right?

More Like This
Here’s How To Combat Performance Anxiety When Trying To Conceive
How Much Hair Loss Is Normal? 9 Signs You’re Losing Too Much Hair
Are You Leaking Amniotic Fluid Or Is It Normal Discharge? Experts Explain
17 Pictures Of Positive Covid Test Results