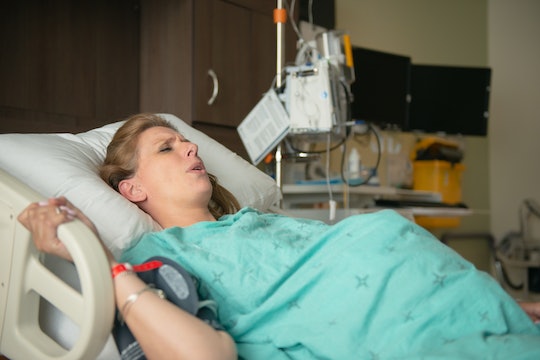 These Easy-To-Digest Foods Can Keep Your Energy Up During Labor, Experts Say

So you're in your hospital gown. Labor pains are rolling in. Beyoncé is sending you power vibes from your labor playlist while your partner stares at you like he's lost his eyelids and forgotten how to blink. Might I offer you a fortifying snack, mom? Ice chips? Crudite? Bacon cheeseburger? What exactly are the best, most easy-to-digest foods to eat during labor?

When one thinks of being in labor, "snacks" probably aren't at the top of list of concerns. You're likely more focused on things like: "how not to puke onto your own legs" or "where the hell is the doula?" or "how quickly can they get the epidural into your spinal cord?"

While some practitioners say nope to food during labor, others are totally fine with it, especially in the earlier stages. Labor can be long (in some cases very, very long) and believe it not, you may find yourself in need of a little nibble. However, the idea of what is suitable to eat when preparing to push a human out of your body and into the world might make you draw a blank. Combos? Pez? Dirt?

I reached out to Kelly Maslen, a birth doula, placenta encapsulator, hypno-birthing instructor, nutritionist, and advocate. Maslen's recommendations are — you'll be shocked to hear — quite nutritious. The word "Entenmann's" was sadly not mentioned.

"During labor, I recommend women eat easily digestible foods such as bone broth or miso soup," Maslen says. "For snacking, I recommend cut-up, easily chewable fruit, because while in labor, most women don’t want to chew much as it can be tiring. Grapes, blueberries, raspberries... these are small, and easily eaten between contractions."

Which makes sense. Scarfing down a burrito doesn't seem very compatible with the Lamaze technique. I imagine it would result in much spillage of cheese and guac. Or be thrown at a partner's face. Just because.

I also chatted with Stephanie Heintzeler, a doula and childbirth educator, and the founder of New York Baby, a service that matches parents-to-be with doulas. Her take on good labor snacks: warm oatmeal with mashed banana, mashed sweet potatoes, chia pudding, non-sugary cookies, and miso or vegetable broth. "The body is occupied with labor, so if there is lot of heavy food to be digested, often times the mother gets nauseous and starts vomiting," says Heintzeler, "The body doesn’t like to digest much during labor. A no would be pizza, pasta, heavy meals with meat, creamy meals, processed foods, and generally large portions. Rather have little snacks here and there."

Maslen agrees that heavy foods are a bad idea, and also recommends avoiding dairy such as cheese, milk, and yogurt, as these foods are "phlegm producing." Which is a valid point. The last thing you want to be dealing with during labor is extra phlegm. You'll already have enough going on without sounding like a swamp creature when inquiring about the dilation of your cervix.

Maslen also gives the thumbs down to meat and deep fried foods, and echoes Heintzeler that the body should be focusing on the uterus contracting, not on digesting heavy foods. So while a corn dog might sound divine, you don't want your already taxed-to-the-limit bod getting side-tracked. Keep it away from the colon and focused on where the real action is.

Or course, your colon may decide to jump in at the last minute with a little guest-starring role when you're actually pushing the baby out. But meh, you'll be so focused on getting that precious bebe out and into your arms, a little defecating on the floor shan't faze you. Crazy, but true.