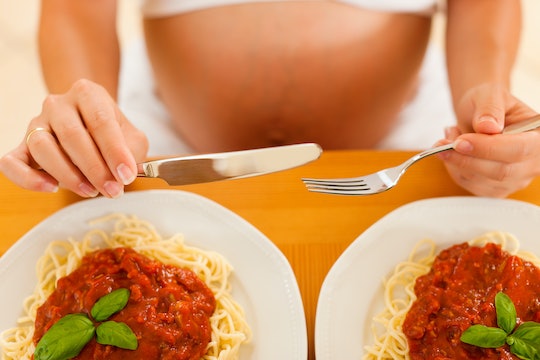 Research Says Eating Carbs Can Lead To A Healthy Pregnancy, So Bring On The Pasta

In the world of me, no food is better than bread. I know it's supposed to be pretty terrible for you, high in calories, low in protein, and full of that modern-day demon, gluten... but guys, it's really yummy. Especially warm out of the oven, when the crust has that nice crackle to it and you slather it with a little butter, there's nothing better. And it turns out, yummy things like bread and pasta might not be so bad, especially if you're pregnant. New research found that eating carbs can lead to a healthy pregnancy, and someone needs to bake those researchers a nice big chocolate cake as a thank you.

A team of researchers out of the University of North Carolina at Chapel Hill (so you know who to thank) recently published some new information about the effect of carbohydrates on pregnant women in the journal Birth Defects Research. The researchers, lead by study author Tania Desrosier, research assistant and professor of epidemiology at the UNC Gillings School of Global Public Health, found that the folic acid found in carbohydrates contributed to a decrease in neural tube defects (NTDs). In fact, women who practice a low-carb diet when trying to get pregnant or newly pregnant had a 30 percent higher risk factor of having a baby with an NTD. These defects can cause a whole host of issues, not the least of which being spina bifida and anencephaly.

"We already know that maternal diet before and during early pregnancy plays a significant role in fetal development," Study author Desrosiers told Babble. "What is new about this study is its suggestion that low carbohydrate intake could increase the risk of having a baby with a neural tube defect by 30 percent. This is concerning because low carbohydrate diets are fairly popular."

In recent years, low carbohydrate diets have been touted with improved energy and a better chance of weight loss. Cutting out things like bread and pasta in favor of vegetables, nuts, seeds, and legumes has become all the rage with pregnant and non-pregnant women alike. And while eating healthfully is always important, perhaps cutting out carbs isn't the best idea in the world for pregnant women or women planning to become pregnant especially.

The comprehensive study, the first of its kind to consider the link between maternal diet practices and potential neural defects in babies, looked at information from 11,285 births in Arkansas, California, Georgia, Iowa, Massachusetts, New York, North Carolina, Texas and Utah between 1998 and 2011. Researchers were able to measure carbohydrate and folic acid intake through using food questionnaire responses.

While 9,545 mothers gave birth to healthy babies without incident, the remaining 1,740 gave birth to babies with neural tube defects, or suffered through a stillbirth. The study did not include women who were pregnant with more than one baby, pregnant women with Type 1 or Type 2 diabetes, or mothers who were carrying a donor embryo.

What the researchers found was that women who ate a diet rich in the folic acid found in carbohydrates like bread, pasta, cereal, and rice enjoyed a 30 percent lower risk of giving birth to a baby with a neural tube defect.

This finding reinforces the importance for women who may become pregnant to talk to their health care provider about any special diets or eating behaviors they routinely practice.

The reality is, pregnancy changes your body by requiring you to take in enough fuel for two people. If you're gluten-intolerant, talk to your health care provider about safe carbohydrate alternatives to boost your folic acid.

And if you're not gluten intolerant? Bring on the baguettes!

More Like This
Yes, It’s Possible To Get Pregnant If You Have An IUD
Pelvic Pain During Pregnancy: What Causes It & How To Deal With It
HelloFresh Is Releasing Spaghetti Meal Kits Inspired By Buddy The Elf
Parents Are Missing Work At Record-Breaking Rates To Take Care Of Sick Kids