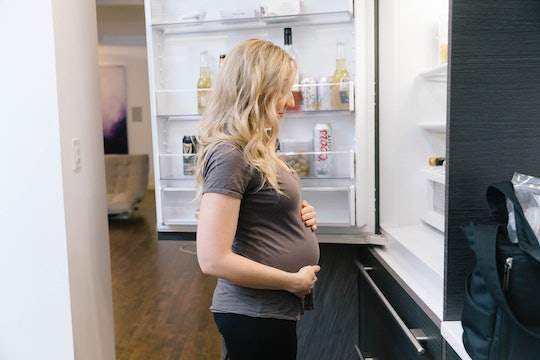 Jalapeño Poppers Sound Like A Foolproof Way To Induce Labor, But Here's The Truth

I knew I was going to be induced for my labor and delivery plan, but a few days before the big day, I was trying anything and everything to get labor started naturally, in the hopes that I wouldn’t have to do that scary foley balloon. While researching some tried-and-true labor induction techniques, another mom told me eating jalapeno poppers to induce labor worked for her. I was skeptical at best. Was it just a coincidence that she was already going into labor and she just happened to eat jalapeño peppers? I was intrigued, but didn’t try it (mainly because I don’t like spicy food much).

But is this trick true? Does eating jalapeño poppers induce labor? I asked Dr. Idries Abdur-Rahman, OB-GYN, author of Everything You Ever Wanted to Know About Pregnancy (But Were Too Afraid or Embarrassed To Ask) and one half of the Twin Doctors for TwinDoctorsTV, if jalapeño poppers could induce labor. “The idea of eating certain foods (especially spicy foods) to induce labor isn’t a new one. People have longed talked about going into labor after eating Chinese food or a spicy Mexican meal. Despite this anecdotal evidence, there is absolutely no scientific evidence that any particular type of food, spicy or otherwise, will induce labor. So, feel free to enjoy your jalapeño poppers, but don’t expect to go into labor after eating them,” he tells Romper.

I had thought maybe this trick would work because I’ve read stimulating your bowels could potentially jump-start labor since your uterus and bowels are kind of in the same area, but Abdur-Rahman says this is false, too. “Many old wives' tales involve things like castor oil that stimulate the bowels to induce labor. While stimulating the bowels (and often diarrhea) can cause transient contractions (the bowels and the uterus live in the same neighborhood after all), there is absolutely no evidence that stimulating the bowels will cause the sustained contractions that are necessary to induce labor.”

So what are some natural ways to induce labor that actually work? “Most natural methods of labor induction involve stimulating increased levels of hormones called prostaglandins and oxytocin,” Abdur-Rahman says. “These hormones soften and dilate the cervix while also stimulating contractions of the uterus — two things that you need to induce labor.”

With that said, Abdur-Rahman suggests nipple stimulation, red raspberry leaf tea, acupuncture and acupressure, and sex. "Stimulating the nipples causes the release of oxytocin, the hormone that the brain normally produces to start labor. One of the easiest ways to stimulate the nipples is to use a breast pump,” he explains. “Good old fashioned sex (preferably with an orgasm) will stimulate uterine contractions. Not only can sex produce contractions, but semen contains prostaglandins, hormones that help to soften the cervix and prepare it for labor.

“Red raspberry leaf tea has been found in studies to help the cervix soften and dilate (preparing it for labor), while also stimulating contractions that can also help kick labor off, and acupuncture and acupressure have both been found to help stimulate labor,” Abdur-Rahman says. “There are multiple acupoints, especially in the feet, that stimulate labor.”

So while eating spicy foods — including jalapeño poppers — hasn’t been scientifically proven to induce labor naturally, things like sex, nipple stimulation, acupuncture and acupressure, and red raspberry leaf tea just might do the trick. It is important to remember to never try to induce labor yourself until you are at least 39 weeks along, and always check with your health care provider first.