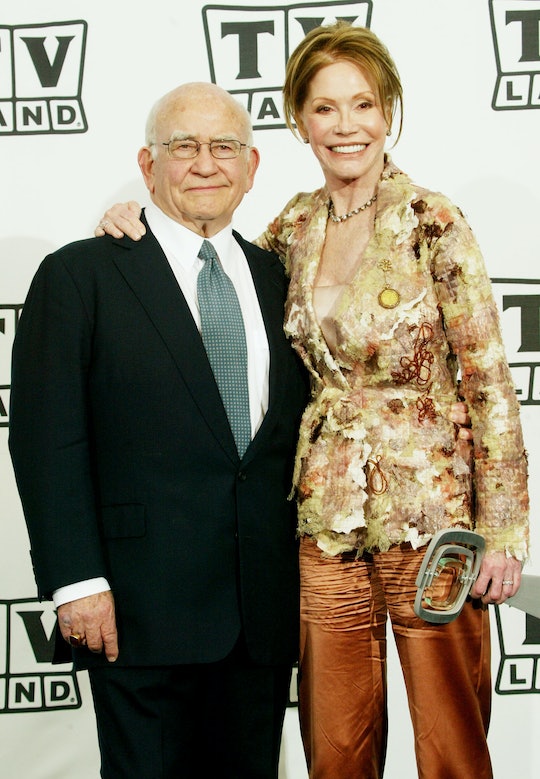 Mary Tyler Moore died on Wednesday at the age of 80. The beloved actress, whose career spanned several decades, leaves behind an incredible legacy not only for the generations of women who followed, but for the people who knew and loved her. As one of her longtime co-stars and friends, Ed Asner remembers Mary Tyler Moore as a "humble trailblazer."

Asner played Lou Grant, title character Mary Richards' irascible boss, throughout all seven seasons of The Mary Tyler Moore Show. The series was groundbreaking when it began in 1970, chock full of television firsts; Moore's character, Mary Richards, played a newly-single woman in her 30s who prioritized her career and her friends over marriage and babies. She wanted equal pay, was open about taking the birth control pill, and introduced an openly gay character on the show with style and tact. Asner's character, Lou Grant, struggled with the changing role of women in the workplace. But he was written (by creator James L. Brooks, the creator of essentially every sitcom ever) as a man who not only grew to accept the new world thrust upon him — he embraced it. Asner and Moore's characters grew close throughout the seven seasons, and the actors remained lifelong friends.

Asner spoke with People about Moore's enduring legacy after he received word of her death this week. "I think there are still a lot of women out there who say if it wasn’t for her, we wouldn’t be where we are," he said.

Asner went on to praise Moore for her humility; According to him, she could have become a diva, but it simply wasn't in her nature:

She was a queen, but she never demonstrated queenly privileges. Her generosity was quite noted. I was always pleased with the treatment and it was seven years of the yellow brick road. That’s how the Mary Tyler Moore show went.

It's no secret that Moore suffered greatly in her 80 years on the planet; She struggled throughout most of her life with alcoholism, was diagnosed with diabetes in her 30s, and lost her only son, who was 24 at the time of his death, in 1980. Despite all of this, Asner told People that she never brought her personal life to the set of the Emmy-winning series:

I didn’t see a different Mary. The good, steady, strong, hard working Mary. I think she changed after the show stopped, but I didn’t see any of that.

The 87-year-old Asner went on to perform in many movies and television shows himself over the years (including playing Santa Claus in the beloved film Elf), but told The Hollywood Reporter that Moore remained an unparalleled actress as far as he was concerned:

She was a prodigious worker. She never stopped concentrating on the goal at hand, which was making a good scene, a good moment. She was the most generous of everyone around her in terms of giving them their moment. She was not a camera hog.

After so many decades as friends, what a loss Moore's death must have been for Asner. As it was for us all.