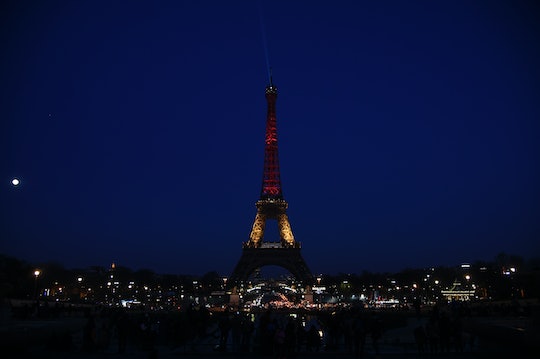 In a show of beautiful solidarity for the victims of the terrorist attacks in Brussels on Tuesday, Paris Mayor Anne Hidalgo announced that the iconic Eiffel Tower would be illuminated with the Belgian flag colors. The terrorist attacks on the airport and a subway station in the Belgian city left at least 31 dead and 230 wounded. Sympathy and concern for the victims have been flooding the internet, politicians offered their support and condolences (including President Obama who vowed in a press conference to "stand in solidarity" with the people of Brussels), and by day's end, the black, yellow, and red colors of the Belgian flag lit up the Paris night sky.

Hidalgo announced the decision to the world earlier on Tuesday using the hashtag #NousSommesUnis, which in English translates to "We Stand United", in the hopes that the iconic symbol would serve as a reminder to all that kindness and empathy would always prevail against fear. "En solidarité avec les Bruxellois, Paris illuminera ce soir la Tour Eiffel aux couleurs du drapeau belge," Hidalgo wrote on her official Twitter (which translates in English, "In solidarity with the people of Brussels, Paris will illuminate the Eiffel Tower this evening in the colors of the Belgian flag").

This symbol of unabashed solidarity is especially moving in Paris, the site of last November's horrific terror attacks that left more than 120 people dead. Credit for both sets of attacks has been claimed by militant jihadist group ISIS, who cited Belgium's involvement in Syria and Iraq as justification for the bombings in Brussels on Tuesday, according to The Independent.

Meanwhile, the city of Paris is clearly ready to remind the Belgian people that #NousSommesUnis is more than just a viral hashtag:

One couple shared a kiss and embrace beneath the illuminated tower, in the spirit of love:

And now, as the Eiffel Tower sets the standard for supporting the victims in Brussels, more iconic European landmarks have followed suit. Landmarks like the Trevi Fountain in Rome, Italy, the courthouse in Lyons, France, and Brandenburg Gate in Berlin, Germany were all illuminated in the colors of the Belgian flag as well as the day came to a close:

These symbolic signs of solidarity can serve a greater purpose than simple empathy. They are a testament to longevity. Each of the monuments mentioned — the Trevi Fountain, Brandenburg Gate, and the Lyons courthouse — have been standing for centuries, unbent and unwieldy. They have stood the test of time through wars, through poverty, through natural disasters, and now terrorist attacks. Come what may, there they stand.

Tomorrow morning, when the people of Paris wake up and head to work, or take their children to the park or run errands, they will see the Eiffel Tower. A symbol in the background of their daily lives, so present and yet sometimes forgotten. Strong and silent, dependable. Unmoved. Draped in the colors of yellow, black, and red. Standing with the victims in Brussels today and tomorrow and the next day, and proving that we are truly united, that there are greater forces in the world than hate and fear. Hopefully, after much time and work and healing, this too shall pass.