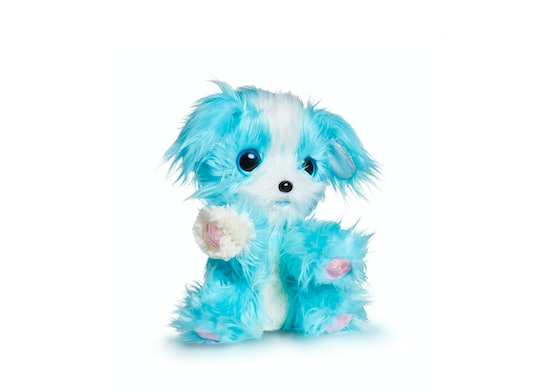 My mom never let me have a dog growing up, citing very valid excuses for why we couldn't handle it every time I begged: We were never home, my sister and I were too young to walk the dog alone, it would poop, etc. Still, I was bummed we couldn't enjoy the fun of a live puppy, but I might not have cared if I had Scruff-a-Luvs My Real Rescue, the interactive dog toy that simulates what it's like to have an actual pup. Cue "If I Could Turn Back Time."

More Like This
These Couches Are Perfect For Climbing If The Nugget Couch Is Sold Out
18 Best Sand Toys In 2021 For Babies, Toddlers, & Kids
You Will Not Regret This Perfect Baby Pool From Target
Disney’s Pride Merch Is The Stuff Of Dreams

Take your mind back to Christmas 2018. One of the hottest holiday toys was Scruff-a-Luvs, the stuffed rescue animal that looks like a ball of matted fur when you take it out of the box. Kids have to brush and bathe the animal to find out what it actually looks like, which is an adorable puppy or kitty. The process mimics the experience of adopting a real pet and encourages kids' caring natures, but that's where the original toy stopped. There wasn't much for kids to do with it after they beautified their faux pet, though it was still a major hit. Expanding on their success, the creators of the toy are bringing kiddos an interactive version of the toy that offers hours of continued fun.

The latest version looks much like the original Scruff-a-Luv, but the new iteration allows kids to have fun with the toy long after the initial unpacking. The interactive elements make themselves known as soon as you open the box: your Scruff-a-Luv will actually shiver and whimper when you take it out of the box as a matted fur ball, behaving like a scared rescue pet. They have to be bathed and groomed to uncover their true appearance just like the original — yes, it's still safe to put in water despite the tech updates — and after they've been cleaned up and given some love, they'll be ready to play.

The toy has over 30 lifelike features and sounds to make them feel as real as possible. Kids can feed their Scruff-a-Luv to hear them eat, cuddle them and listen to their heartbeat, pat their backs to help them get rid of the hiccups, and more. Figuring out all the things your Scruff-a-Luv can do is part of the fun, keeping little ones interested for hours. It's pretty much as close as you can get to having a dog or cat without actually having one. Check out this promo video for the toy featured on the Scruff-a-Luv site to get an idea of what the toy looks like.

That's just a taste of everything the Scruff-a-Luv can do, and my interest is definitely peaked. Unfortunately, you'll have to wait a bit before you can bring one home. The Real Rescues hit shelves in October 2019, when they'll be sold at all major retailers for $40, just in time for the holiday shopping rush. Good luck fending off your kiddo's pleas for a real pet until then.