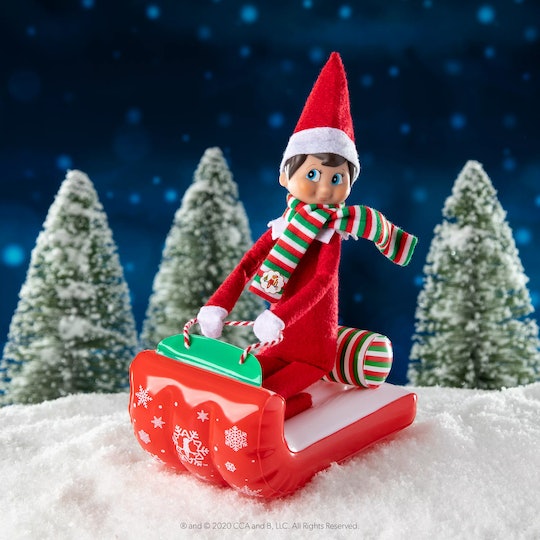 Inflatable Rocket Ship, Anyone? These New Elf On The Shelf Toys Are Coming This Fall

'Tis (almost) the season for Elf On The Shelf, which is one tradition that’s definitely not canceled this year. The Scout Elf collection seems to grow every year (last year the elves got pets) and the new Christmas 2020 Elf On The Shelf accessories include inflatable accessories, DVDs, mini figurines, and even more pets.

Has your Elf been meaning to learn how to paint, or perhaps join a soccer squad? Well, now they can. The Arctic Artiste ($15) comes with a teeny dry easel and markers, an elf-sized smock that reverses to show a bright tie-dye print, plus four watercolor pages and a brush so your little one can get creative alongside their buddy. The green, red, and white soccer uniform ($10) comes with a jersey and shorts for your friend, plus socks and shoes (good luck maneuvering those onto elf feet) and a peppermint stripe cardboard goalpost scene.

There are plenty of other new outfits for the Scout family in the “Claus Couture” collection as well (I wish I could take credit for these names) including a purple sequin and tulle Sugar Plum party dress,($10) a mighty superhero set ($10), and a fringy tinsel dress ($10) that I wish came in my size.

Should your elf decide it's time to rocket off this Earth (understandable) then you'll be pleased to know there's an astronaut — excuse me, Clausmonaut costume ($15) — and sold separately is an inflatable space rocket ($15) that comes with glow-in-the-dark stickers for a truly out-of-this-world time.

I don't want to give away all the surprises in store, but let's just say, there's the cutest inflatable sled ($10) so your elf can soar down a snowy hill, then cozy up in their new reindeer sleeping bag ($10).

The collection is not yet available, but you can sign up to be notified when a products start shipping on the official Elf On The Shelf website. Most of these items will be available starting mid-September, a rep for the brand confirmed to Romper, but the exact date has not been announced.

And if you needed another excuse to roam around the best store ever, two of the new products will be available only at Target stores nationwide beginning November 1. The first is a take on the the classic Christmas book, The Elf On The Shelf’s Night Before Christmas ($18) and the second is Santa’s Enchanted Cookie Plate ($20), which receives recorded "updates" about Santa's journey from the Scout Elf Command Center.