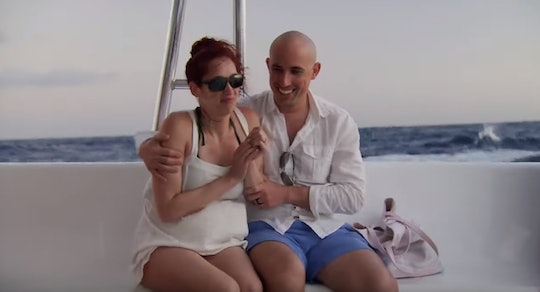 Elizabeth & Jamie Are Working Things Through On 'Married At First Sight'

When Elizabeth and Jaime first met at the altar on Married at First Sight, they seemed to have an instant connection. Their chemistry followed them on their honeymoon in Antigua, but within just a few days, they ended up having their first fight. However, after talking things through, Elizabeth and Jaime reconnected on Married at First Sight, and now their future as a couple looks even brighter.

Their relationship was first tested in the Jul. 3 episode, when they had their first fight, just two days into their honeymoon. After spending the morning hanging out with the other Married at First Sight brides, Elizabeth came back to her hotel room expecting to see Jaime waiting there for her. After showering and changing, she waited for Jaime a bit longer, and when he didn’t show up, she went to lunch by herself.

After lunch, Elizabeth went back to the hotel room and found Jaime. . “You just left me in this hotel room for almost two hours,” she said angrily. “I was waiting on you to go have lunch, because that’s what all the other people were doing.” After pointing out the fact that Elizabeth never told him where she was going, and made no plans on where and when to meet, Jaime told her that he wasn’t a “mind reader.”

In the Jul. 10 episode, when the couple was on a choppy catamaran ride, Elizabeth began feeling sick. When Jaime started cracking jokes to make her feel better, she snapped at him and cursed him out. When the boat docked, she got off and walked away. Later, she explained to Jaime that she was physically ill and throwing up, and he apologized for not being more empathetic. He told her that he didn’t like the way she snapped at him, so Elizabeth apologized to him as well.

“I want to experience these feelings, and let those feelings happen, and let those come to the surface, and not just bury those underneath,” Jaime says in a confessional. “And once we get on that same radio frequency, we’re going to be good to go, which is great because I’m married to her. No matter what happens, I want to learn to have that unconditional caring. And no matter if somebody’s awful to you, if they need help, that you’re there for them. And that’s something that will really help her appreciate me and appreciate what I’m trying to do for her.”

After talking things through, Elizabeth and Jaime realized that their biggest issue is miscommunication, which is completely understandable, given the fact that they just met. They both have high hopes for their relationship, and in the preview for the upcoming episode, they seem more than ready to start their new lives together.