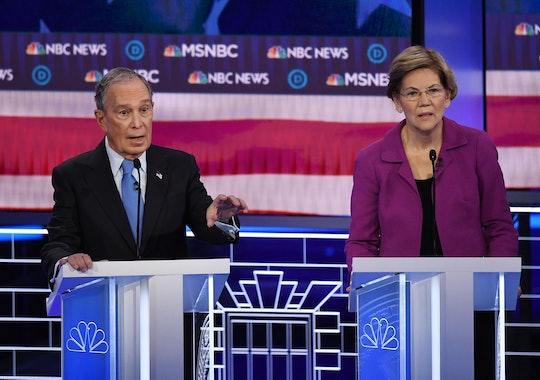 During Tuesday night's debate, Massachusetts Sen. Elizabeth Warren confronted former New York City Mayor Mike Bloomberg over allegations that he told a pregnant employee to "kill it," an accusation he vehemently denied. Following the heated moment, Warren was questioned by MSNBC's Chris Matthews about why she believes the woman instead of Bloomberg and fiercely defended her stance.

"You know, I'm just really tired on this world. This one is personal for me. It really is," Warren went on to say to Matthews. "Pregnancy discrimination is real... We have gone on and on where people say 'I can't really believe the woman.' Really? Why not?"

During Tuesday night's debate, Warren opened up about a time when she was a 21-year-old special education teacher and lost her job after it became clear that she was pregnant. "I loved that job. And by the end of the first year, I was visibly pregnant. The principal wished me luck and gave my job to someone else," Warren said on the debate stage. "Pregnancy discrimination? You bet." Warren went to say that she was young and "didn't have a union to protect" her at the time. "I didn't have any federal law on my side so I packed up my stuff and went home," she said. "At least I didn't have a boss who said to me, 'kill it' the way that Mayor Bloomberg is alleged to have said to one of his pregnant employees."

Bloomberg promptly denied the accusation, which was reportedly lodged against him in 1998 by former employee Sekiko Sakai Garrison, according to court documents published by The Washington Post. According to Business Insider, Bloomberg reached a confidential settlement with Garrison, who was one of 40 discrimination lawsuits filed against the billionaire's company between 1996 and 2016.

Romper's request for comment from Warren and Bloomberg's campaigns were not immediately returned.

Matthews continued to challenge Warren on her stance. "You believe he's that kind of person that did that? ... You believe he's lying?" Matthews said to the Democratic presidential candidate, who doubled down. "I believe the woman," Warren said, "which means he's not telling the truth."

"Why would he lie? ... Just to protect himself?" Matthews replied.

"Yeah, and why would she lie? That's the question, Chris," Warren responded.