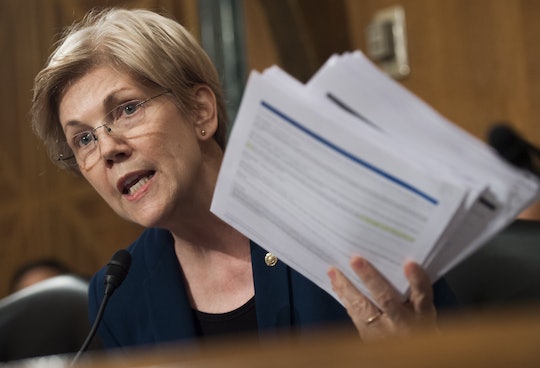 Massachusetts Sen. Elizabeth Warren has had it with the big banks — most recently the financial behemoth Wells Fargo. The CEO of Wells Fargo was in the hot seat with Warren on Tuesday at the Senate Banking Committee's Wells Fargo hearing, and Warren was in no mood to tread lightly. In an exchange that has since gone viral, Warren told the Wells Fargo CEO that he should resign after the company's most recent banking scandal, unleashing an eviscerating diatribe that left the man visibly stunned.

John Strumpf, the CEO of Wells Fargo for the past 35 years, was answering questions posed to him by the Senate regarding a number of bogus accounts opened under client's names by Wells Fargo employees for the past five years. Strumpf apologized for the scandal and announced that 5,300 employees had been fired in connection with the false accounts. In a prepared statement, he told the Senate:

I am deeply sorry that we failed to fulfill our responsibility to our customers, to our team members, and to the American public. I do want to make very clear that there was no orchestrated effort, or scheme as some have called it, by the company.

This was not quite cutting it for Warren. She pointed out that Strumpf had made millions of dollars in the scam, and told him: "You should resign ... and you should be criminally investigated."

On Sept. 8, Wells Fargo was fined $185 million after an internal review discovered that over 2 million false bank accounts and credit cards had been opened by company employees using client information without the client's knowledge or permission. These accounts were opened between May 2011 and July 2015, but Strumpf told the committee that the bank is committed to looking into accounts as far back as 2009 and 2010.

As Strumpf appeared to attempt to shift blame on to employees, Sen. Warren took him to task for his actions. She referred to the Wells Fargo Vision and Values Statement, in particular: "If you want to find out how strong a company's ethics are, don't listen to what its people say, watch what they do."

"So, let's do that," Warren said, before admonishing Strumpf for failing to accept any sort of accountability while pushing the blame on lower level employees. "It's gutless leadership."

Warren ended her line of questioning with this short speech:

Here's what really gets me about this, Mr. Stumpf. If one of your tellers took a handful of $20 bills out of the crash drawer, they'd probably be looking at criminal charges for theft. They could end up in prison.

But you squeezed your employees to the breaking point so they would cheat customers and you could drive up the value of your stock and put hundreds of millions of dollars in your own pocket.

And when it all blew up, you kept your job, you kept your multi-multimillion-dollar bonuses, and you went on television to blame thousands of $12-an-hour employees who were just trying to meet cross-sell quotas that made you rich.

"This is about accountability. You should resign. You should give back the money that you took while this scam was going on, and you should be criminally investigated by both the Department of Justice and the Securities and Exchange Commission. This just isn't right.

Sen. Warren wasn't the only senator who voiced anger and frustration over the Wells Fargo scandal (although she was certainly the most fired up). As Sen. John Tester of Montana pointed out, speaking of the rare unity of the committee in their criticism of Strumpf:

You have done something that’s never happened and united this committee on a major topic … and not in a good way.

Whatever happens to the bank next is still up in the air. For now, top brass have spoken out in their own defense, with a Wells Fargo spokesperson telling Romper in an email recently,

It is important to understand the context, the five year period involved, and the size of our workforce. The 5,300 terminations took place from Jan 2011 to March 2016. The actions we have taken with respect to team members and managers reflect our commitment to monitoring and addressing any inappropriate sales conduct. On an annual basis, more than 100,000 team members worked in our stores, and the number terminated, about 5,000, represents about 1 percent of this workforce over the five year period. While we regret every interaction that was not handled properly, the number of instances and team members involved represent a very small portion of our business.

Still, despite the apologies and defenses put forth by the company, it doesn't seem to be enough — and when Sen. Warren catches your scent... watch out.