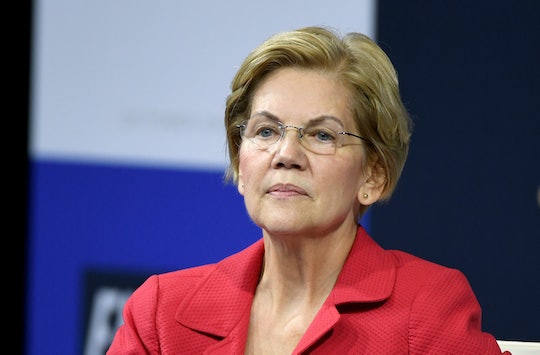 Massachusetts Sen. Elizabeth Warren might be a major power player as a presidential candidate in 2019, but back in 1971 she was just a young pregnant woman trying to hold on to her job. A new teacher who was struggling with the same things as the rest of us working moms: balancing career with family. Worried about the ramifications of motherhood not just on her psyche, but also on her new job. And it seems she is in no way alone. As Warren shared her story of losing her job while pregnant many years ago, it's resonated with so many others. It might be nearly 50 years later, but in some ways we aren't much further along, are we?

Back then, in the 70s, Warren was a recent graduate of the University of Houston. She had been hired by the Riverdale Board of Education to become a speech pathologist for the 1970-1971 school year in New Jersey, according to The New York Times. She also became pregnant with her first child that year, and unfortunately, she's said, previously and recently, that her condition apparently changed everything.

"By the end of the first year I was visibly pregnant, and the principal did what principals did in those days: wished me luck, showed me the door, and hired someone else for the job," she explained during a Town Hall in June, according to Vogue. And in an interview with CBS News on Monday, after some casted doubt on her claims that she was "shown the door" due to her pregnancy, she spoke about her story once again.

"All I know is I was 22 years old, I was 6 months pregnant, and the job that I had been promised for the next year was going to someone else," she told CBS News. "The principal said they were going to hire someone else for my job."

The presidential hopeful reiterated this same all-too common tale on Twitter on Tuesday morning. "When I was 22 and finishing my first year of teaching, I had an experience millions of women will recognize," she wrote. "By June I was visibly pregnant — and the principal told me the job I'd already been promised for the next year would go to someone else."

Warren went on to point out that she realized her story of being asked to leave while visibly pregnant happened before Congress outlawed workplace discrimination against pregnant employees in 1978, but added in a follow-up tweet, "we know it still happens in subtle and not-so-subtle ways. We can fight back by telling our stories. I tell mine on the campaign trail, and I hope to hear yours."

Of course Warren's tweet sparked backlash from those who questioned the validity of her story. People who wrote that she was lying about losing her job over her pregnancy in an effort to win some sort of sympathy vote and become the first female President of the United States. Despite the fact that she actually wrote about this experience in her 2014 memoir A Fighting Chance, five years prior to running for the Democratic nomination.

Whether people want to believe Warren's story or not, perhaps they'll believe these other women. People who took to Warren's Twitter feed to share their own stories of workplace pregnancy discrimination that took place much more recently than 1971.

"I once applied for a job while VERY pregnant and was told that I might not be a good fit because I had 'other priorities' and a gesture was made to my stomach and that was in 2013 so yeah, I believe Warren on this one," one person wrote on Twitter.

Another person wrote on Twitter, "I was 1 of 3 being developed for succession for an EVP job. All was moving rapidly and very well for me .... 5 months later I was nicely and confusingly told I would have to 'sit this one out.'... 'It happens' my boss said. I was 8 months pregnant. That was 2012."

Discrimination against pregnant women in the workforce comes in all forms, and it's often hidden under the guise of performance issues, as one husband noted on Twitter: "My wife was put on a 90 day Performance Improvement Plan with metrics no one in the company could hit...the day she returned from maternity leave. 90 days later they let her go." He also pointed out that this happened in June 2019.

All of these people have stories that need to be told, of ongoing discrimination against pregnant women. And they're not running for President of the United States, so I guess you can just go ahead and believe them, OK? It's a thing. It happens. And it needs to change.