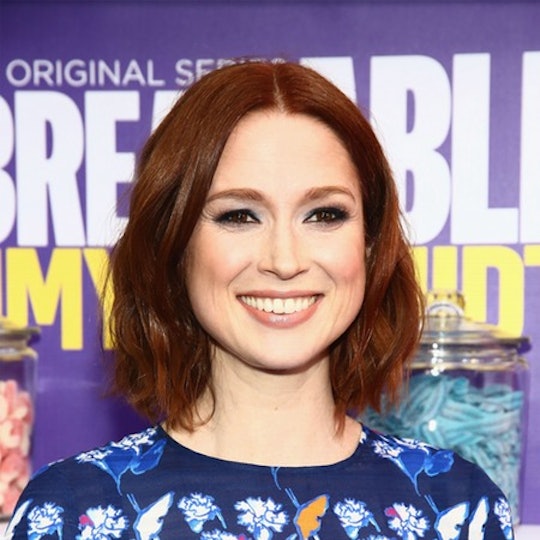 The star of Netflix’s Unbreakable Kimmy Schmidt is expecting her first child and loving every moment of pregnancy, even the odd things moms do for their bundles of joy. On Friday, Ellie Kemper tested this one pregnancy food theory in the most bizarre way during her appearance on The Late Show with Stephen Colbert. The adorable mom-to-be stocked up on sardines, even though she hates them, because the fishy oils could make your baby smarter.

Colbert unveiled a heaping plate of sardines and Kemper gobbled a fish in one bite. "I don’t like it!" Kemper said while squinting with disgust. "But on the other hand, I can feel baby getting smarter!"

Sardines are a 'love them or hate them' kind of food, but studies have found that eating fish during pregnancy could increase a baby's IQ. For a brain and health boost, studies recommend eating up to 12 ounces of seafood, such as salmon, tuna, and sardines each week during pregnancy. A tin of sardines a week would meet the Omega 3 quota a growing baby would need.

"Sardines are so crucial to your child’s development, that little tins of the stuff should be included in the baby gift bags that the hospital sends you home with," mommy blogger Dani Silbermann wrote in 2015.

Back in the early days of Kemper’s pregnancy, she adorably announced that she and her husband Michael Koman were expecting and celebrated their baby-to-be by indulging in a pint of Ben and Jerry’s ice cream during her appearance on The Tonight Show Starring Jimmy Fallon.

"I’ve been having a pint every other night," Kemper told Fallon before scooping out a bite. "I will probably fall asleep while I eat this because it’s going to be like a pavlovian response."

Kemper and her hubby have decided to keep the gender of their baby a surprise for as long as they can.

"We are not finding out — isn't it wonderful?" Kemper told the Today show in April. "We have it in an envelope, actually. But I haven't looked!"

The actress continued to tell the hosts of the Today show that during her first trimester of pregnancy she couldn't even look at ice cream, but instead craved something salty, like potato chips. She also said during her interview that while she feels fine, the first few months of pregnancy felt "like a constant hangover."

The leading lady managed to conceal her pregnancy while filming this second season of Unbreakable Kimmy Schmidt and has kept the due date under wraps as well. While Kemper may not be dishing all the details for the comedy kid make his/her debut, she does seem to be soaking every unique pregnancy experience — both yummy and yucky.