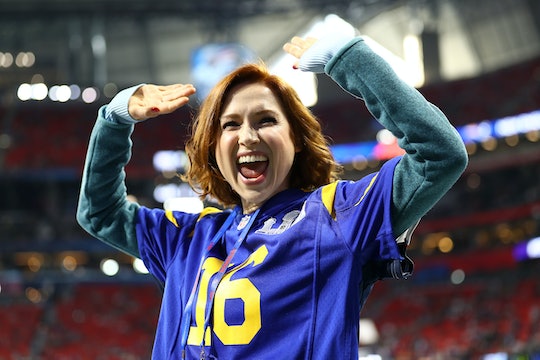 It takes a brave parent to willingly travel with a child under the age of 5. There are about a million things that could induce a temper tantrum on the road with a kid, including, but not limited to, diaper changes they don't feel like doing, a show they've never seen before not being downloaded onto their tablet, and sunshine. But here's a mom who knows how to pacify her kid on any adventure: Ellie Kemper's go-to travel snack for her toddler has saved her on more than one occasion, and they might help you, too.

You probably know Kemper for her on-point comedic timing on The Office or from her leading role in The Unbreakable Kimmy Schmidt. She most recently took on a gig as Hellmann's spokesperson. (Yes, it may seem a bit random, but she apparently really, really, really likes mayo). In an interview with Romper at the Hellmann test kitchen, Kemper spilled her secret for keeping her 2-year-old toddler, James, happy when they're on the road, which happens pretty often thanks to her career. Her fix for the terrible twos? Bambas.

Not familiar? Same. But according to Trader Joe's, Bambas are a popular puff snack from Israel, and they're essentially a peanut version of a cheese puff. They have a peanut flavor with a nice crunch, so they're unsurprisingly delicious. TJ's is one of the handful of retailers that stocks the yummy snacks in the U.S., and the snack's popularity in Israel is what made the grocer decide to bring them stateside. "They’re absolutely delicious, but they’re junk. [So] I only give it to him when we’re traveling...[and] I swear he gets, like, giddy off them," she says.

Think of Bamba's like a peanut butter version of a cheese puff. They're airy, crunchy, and really addictive. Buy a bag for your little one and the duration of your simmer road trip. They're hard to find in the US, but Trader Joes has you covered, selling the puffs for just $1 per 3.5 ounce bag. Wins all around.

I, too, get giddy after eating my favorite snacks, so I feel you, James. Food isn't Kemper's only hack for keeping her little one happy on the road, though. "If there’s a time difference, I try to like just put him on the new schedule," she says, working to make him comfortable and get him back in a routine as quickly as possible. "But that can backfire," she admits, explaining that flexibility is really the crux to her approach to parenting, as she works to do whatever will be best for James.

For instance, Kemper usually gives her son a bath every night, but lately she's been reconsidering, as James sometimes doesn't want to get in the tub. "He’s not that dirty," she jokes. But she'll probably stick with it while the routine of it continues to work for them; it's about listening and figuring out what he needs. And when all else fails, there are Bambas.

At the end of the day, Kemper's focus is just making sure James is happy and healthy, because her kiddo is her number one priority, always. "This belongs on a needlepoint-ed pillow, but it’s a love more powerful than you’ve ever understood," Kemper shares of her feelings about being a mom. Well, seeing as she's expecting baby number two, it sounds like she'll need to put in an order for some new pillows stat.