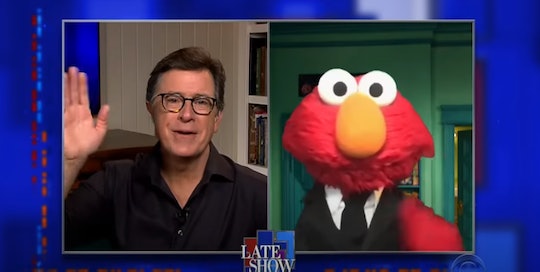 The Late Show With Stephen Colbert/YouTube

The world of late night talk shows can be pretty intense. There are a lot of options and, naturally, every host wants to be the one on top. Unless, of course, you are the sweetest little muppet on Sesame Street who is dipping his toe into being a talk show host for the first time. In a recent interview on The Late Show, Elmo assured Stephen Colbert they won't be competitors in the world of late night TV because they have a different "target demographic." And, of course, Elmo's bedtime just wouldn't allow for them to be on at the same time, so that's a relief.

Elmo will soon debut his own talk show called The Not-Too-Late Show with Elmo on HBO Max, which Colbert couldn't help pointing out in their video interview "sounds awfully close to" The Late Show with Stephen Colbert.

"But not too close," Elmo countered, telling Colbert that he "checked with some experts to make sure." Who are those experts? Well Colbert assumed they were Elmo's lawyers (please try to imagine the muppet sitting down with a high-powered team of attorneys) but it looks like the experts were "the letters T and M."

Elmo's new talk show, premiering on HBO Max on May 27, will offer a different format from his usual gig on Sesame Street. More of a variety show where muppets and other non-furry celebrities like talk show host Jimmy Fallon can visit him on set. And perhaps the best part? At the beginning of every episode, Elmo has to get permission from his parents to be excused to go do his talk show. Very different from The Late Show — Elmo was right.

Beyond the fact that their talk shows will appeal to a very different demographic, Elmo reassured Colbert that "Elmo won't overlap with Mr. Stephen's live same-day broadcast market share. Whatever that means."

The Not-Too-Late Show, which also features Cookie Monster as Elmo's sidekick, has a run time of about 15 minutes as well. Much shorter than The Late Show with Stephen Colbert on CBS, usually clocking in around an hour with commercial breaks.

Isn't it great to see two talk show hosts making space for each other? Not getting competitive and weird about their similarities and celebrating their differences instead? There's room for both Elmo and Stephen Colbert.