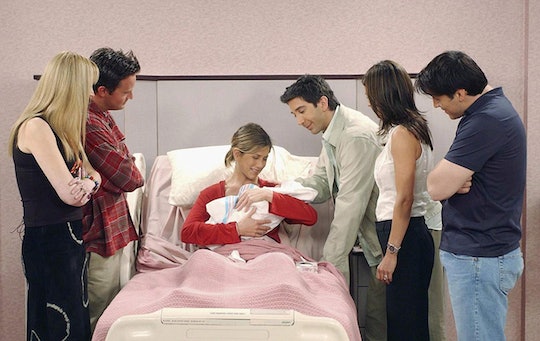 The Baby Name Emma Couldn't *Be* Any More Popular, & We Think 'Friends' Is To Blame

The baby name Emma has been the top name in the United States for the past five years straight, per Social Security Administration (SSA), and it's highly likely that everybody knows an Emma. But is Emma a popular baby name for a specific reason? Can we blame Baby Spice or Ross and Rachel? When I taught dance classes from 2010-2018, I had an Emma in nearly every one of my classes each year. My sons, ages 5 and 7, both have classmates named Emma. My best friend's sister named her baby Emma in 2007. What is it about this particular name that makes it so popular?

When I hear the name Emma, my brain automatically flashes to the scene in Friends where Rachel and Ross are having a hard time deciding on a baby name for their just-born daughter. With the whole group gathered around, Monica explains that she's had the name Emma chosen for her future daughter since she was a teenager. Rachel lets out a heartfelt gasp, absolutely smitten with the name. Monica then sweetly allows her best friend and brother to use the name she has had her heart set on her own future baby girl.

Emma is 44th on the SSA's list of top baby girl names over the last 100 years, released in 2018. From 2010 to 2018 alone, there were 177,410 baby girls named Emma in the United States, making it the top baby girl name of that decade, according to the SSA. Although the baby name Emma ranked third in most popular baby girl names in the decade from 2000 to 2009, there were a whopping 181,257 babies bearing that name born during that time period, per the SSA.

My best friend's sister named her daughter Emma back in 2007 when the baby name Emma was the third most popular baby name, per the SSA, and five years after the aforementioned Friends episode aired. I had my friend text her sister to ask why she chose to name her baby Emma, and her reply included that Friends influenced her decision.

Emma Watson was also a factor in her decision to name her baby Emma. Watson appeared in the Harry Potter films from 2001 to 2011 while the baby name Emma saw a steady rise in popularity. Coincidence? Probably not.

Pop culture has had plenty of influence over the years when it comes to baby names. From 1970 to 1984, Jennifer was the most popular baby name in the United States for 14 straight years, Quartz reported. The main character in the 1970 film Love Story is attributed to the baby name Jennifer catching fire in 1970 and burning bright for a decade and a half when parent after parent began hearing the name everywhere, according to Nameberry.

A similar phenomenon is seen when the Royal family names babies, People reported. For instance, my oldest son is named William. He was born the same year that Prince William and Kate Middleton's first son George was born. I'm not saying that I named my son after a prince, but I'm also not saying that hearing about Prince William in the news for a year straight leading up to my son's birth didn't influence my decision.

To further back up the theory that Friends heavily influenced the popularity of the baby name Emma, consider the fact that the sitcom began streaming on Netflix on Jan. 1, 2015, as Entertainment Weekly reported. Emma reached the top of the SSA's baby name rankings in 2014 and has stayed at number one ever since. Is an entire new generation streaming the show and continuing the trend of babies named Emma because they hear it repeated over and over again on the show? It's a definite possibility.

Regardless of the reason why Emma is such a popular baby name, the fact remains that the name does not appear to be going anywhere fast, and neither does the sitcom that may have inspired the naming trend. Friends still makes $1 billion in revenue for Warner Bros. each year in syndication, according to USA Today. If history continues to repeat itself, the name Emma will still be there for you for years to come.

More Like This
20 Bridgerton-Inspired Baby Names
30 Adorable Baby Halloween Costumes, From Animals To Avocados
Are Babies Lonely In The NICU? Here’s What Experts Say
How To Get Boogers Out Of A Baby's Nose