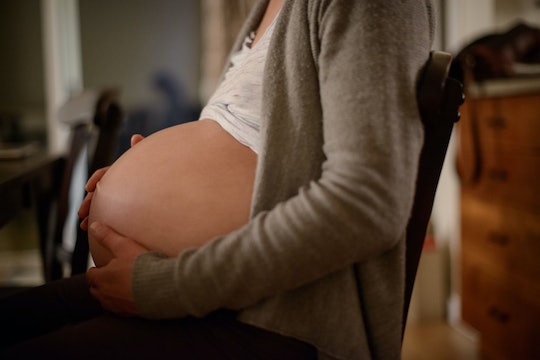 Making the decision to induce my first child wasn’t an easy one for me. Like many mothers, I had a specific vision of how my pregnancy would progress and how I would eventually go into labor and give birth. Let me tell you, my plan did not involve a labor induction.

Learning that things would not be going how I had planned created intense anxiety in me. I cried through that final doctor’s appointment, all the way home, and then climbed into bed for the rest of the day. Looking back, I can see how my emotional response was pretty extreme. I don’t blame myself, of course, I hadn’t slept well for weeks and was dealing with PUPPPS, an incredibly itchy rash that pregnant women sometimes experience in the third trimester. I had a lot of fear of the unknown, and induction was the unknown at that moment.

My anxious reaction to induction isn’t all that uncommon. One mom confesses that her experience was a lot like mine — she spent several hours crying after committing to her induction. Emilie Mense Caby, a 30-year-old mom expecting her third child, scheduled the induction of her first child. As a young mother, she felt overwhelmed with anxiety about having labor induced.

“I was induced... and I swear I had so much anxiety about it that it didn’t work,” Chaunie Brusie tells me of her fourth delivery. “Could be a coincidence, but it didn’t really kick in until mentally I finally accepted it was happening!”

Despite that impression that induction feels like a novel choice at the time, it is actually a fairly common experience. A reported 23 percent of mothers are induced in the United States, per National Birth Certificate data, and that number may reflect under-reporting. The reasons for induction vary greatly, according to Kecia Gaither, MD, who is double board-certified in obstetrics/gynecology and maternal-fetal medicine. Common reasons for induction include being pregnant beyond your due date, diabetes, hypertension or preeclampsia, and fetal growth restriction. Labor inductions do have lower satisfaction rates, compared to spontaneous vaginal births — a 2005 study of 900 pregnancy women, half of whom were induced, found that 34 percent were unhappy with the amount of information provided about the induction prior to the procedure. Researchers also found that many of those women had unrealistic expectations of how long the procedure would take (that is, more than 12 hours). The number of vaginal examinations was also a negative for the experience of laboring women.

“Induction sounds like quite a scary term,” Gaither says. “But in reality, all it is is giving Mother Nature a jump start.”

So how can you emotionally prepare for the big day? Gaither and a few moms who have been there, done that share what has effectively helped pregnant people manage pre-induction jitters.

For Christie Schermek, a 31-year-old mom of two, a doula provided invaluable support leading up to her induction and throughout her labor and delivery.

“She reminded me to have positive affirmations and just really validated all my feelings,” she said. “[She] met me with empathy and encouragement where I was.”

Other moms agreed that having support was crucial to them during the labor, but not all moms turned to a doula. Brusie spent time texting and calling friends and family members she knew would give her the support she needed. Mense relied heavily on her support system, too, which included two close friends, her mom, and her younger sister.

Mentally preparing yourself can also inform and support your emotional state. Gaither works closely with her patients to help them understand exactly what the process will look like, so they know what to expect.

“The process may involve softening the cervix with a medication that’s either placed in the vagina or given by mouth,” she says. “This, in turn, is followed by administration of an intravenous medication known as Pitocin.”

She explains further that Pitocin is a synthetic form of the hormone, oxytocin. In the case of spontaneous labor, the brain produces oxytocin and it causes uterine contractions. Pitocin creates the same response in the body.

“When advising of an induction, I completely inform my patient of the reasons for the decision, potential outcomes if the induction is not undertaken, process, and of course letting them know that analgesia — be it by vein, or epidural — is readily available.”

In the days leading up to the induction, it is a good idea to practice exercises that feel grounding and calming.

In addition to a full understanding of the process, a birthing class is a great way to feel confident in your own ability to move forward with labor, especially when things aren’t going exactly as you originally planned (one reason many birth educators prefer "birth options" to "birth plans"). These classes are also a great opportunity to connect with other mothers who are in the same circumstances or hear stories about inductions that went well, says Gaither.

Unrealistic expectations of how birth will go are cited as in part responsible for negative experiences of birth, noted a research paper in Nursing Inquiry that called for a focus on the "good enough" birth, "instead of concentrating on promoting normal birth which is very difficult, if not impossible to define in retrospect, or to prospectively promote."

Lastly, in the days leading up to the induction, it is a good idea to practice exercises that feel grounding and calming. Gaither recommends jotting down your thoughts and feelings in a journal, practicing meditation, learning Lamaze, and keeping up with exercise to keep your brain and body feeling well.

If for some reason you suspect your anxiety has reached an unhealthy level, Gaither advises reaching out to your doctor and let them know what you are experiencing.

“Any level of anxiety which results in lack of appetite, sleep, crying bouts, drastic change in behavior should be bought to the attention of the health provider,” she notes.

Inductions might not be your first preference when it comes time to meet your baby, but there are ways to prepare, and that starts with demystifying the process — if you've gotten this far, you're doing great.