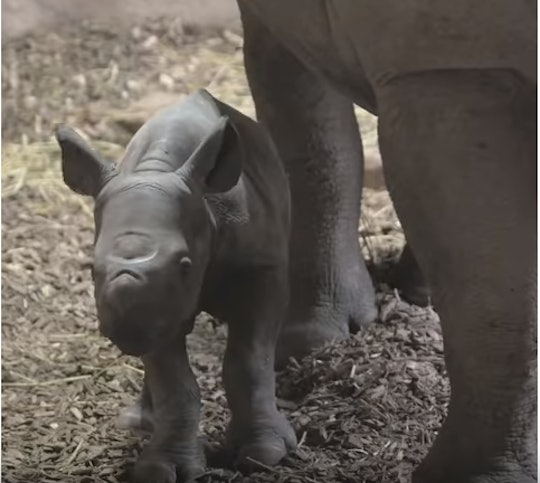 Step Aside April The Giraffe: Some Zoogoers Got To Witness An Endangered Rhino Giving Birth

Picture this if you will; you take your kids to the zoo for the afternoon. You want them to develop a deep appreciation for wildlife, endangered wildlife specifically, so that they grow into decent humans who care about the planet. At best, you're hoping to take a picture with a zebra in the background or something. I bet you would never expect to see an endangered rhino give birth in front of a bunch of zoo visitors though, would you? That would be next level. But it's a thing that happened. And you could have been there to see it with your kids... wouldn't that have been fun and informative? Imagine the questions you would have had to answer.

Malindi, a 12-year-old rare black rhino living at the Chester Zoo, appears to be something of a wild card. While normally black rhinos tend to give birth at night, according to the Chester Zoo's website, Malindi was like, But who will be hear to watch me in all of my magnificence? So instead of giving birth at night when no one would have been around to watch, Malindi waited until she had an audience around lunchtime on Thursday.

There, proud and refusing to wait to welcome her baby until she was under cover of darkness, Malindi gave birth to a healthy male calf after laboring for about 30 minutes (lucky lady). While delighted onlookers got the show of a lifetime.

Tim Rowlands, curator of mammals at Chester Zoo, said in a statement:

The newborn was delivered onto soft wood mulch and within next to no time it was up on its feet and running around – it couldn’t have gone any smoother.Although it’s still very early days, the little one is showing great signs by feeding regularly and mum and calf appear to have bonded very quickly.

Indeed, the calf was up and walking around within 15 minutes after being born, according to the zoo. So just think of it this way; if any onlookers were sipping on a latte and watching the black rhino calf come into the world, they were probably only half done their drink.

According to Bagheera.com, there are only 65,000 black rhinos still alive in the world today. So watching this birth was especially significant. The Chester Zoo now has 11 black rhinos on site after this recent birth, according to collections director Mike Jordan, who told People:

This new arrival is a real boost to a critically endangered species. It increases the number of Eastern black rhino at Chester to 11 and is another vitally important success story in a Europe-wide breeding program for these highly threatened animals. A thriving, healthy population of this high-profile species in good zoos is vitally important to the future of this species and a key component of our mission to prevent their extinction.

Now if you're fretting over missing the birth of this black rhino, try to remember that life goes on. And there are more wild animals to watch giving birth, if that's your thing. April, the giraffe who took the internet by storm last year, is pregnant again at the Animal Adventure Park in Harpursville, New York, according to CTV News. Just like last time, the park is sharing a live feed of the birth, which is set to happen sometime in March 2019, as CTV News reported.

Don't want to wait almost a whole year? Well, you could always visit local zoos with your family and hope to see a pregnant animal of some sort go into labor. Or just watch the old video of April the giraffe giving birth in April 2017. Otherwise, you might just have to wait until next year... but at least you know it's coming, right? Unlike those unsuspecting zoo visitors in Chester, who got a real eye full.