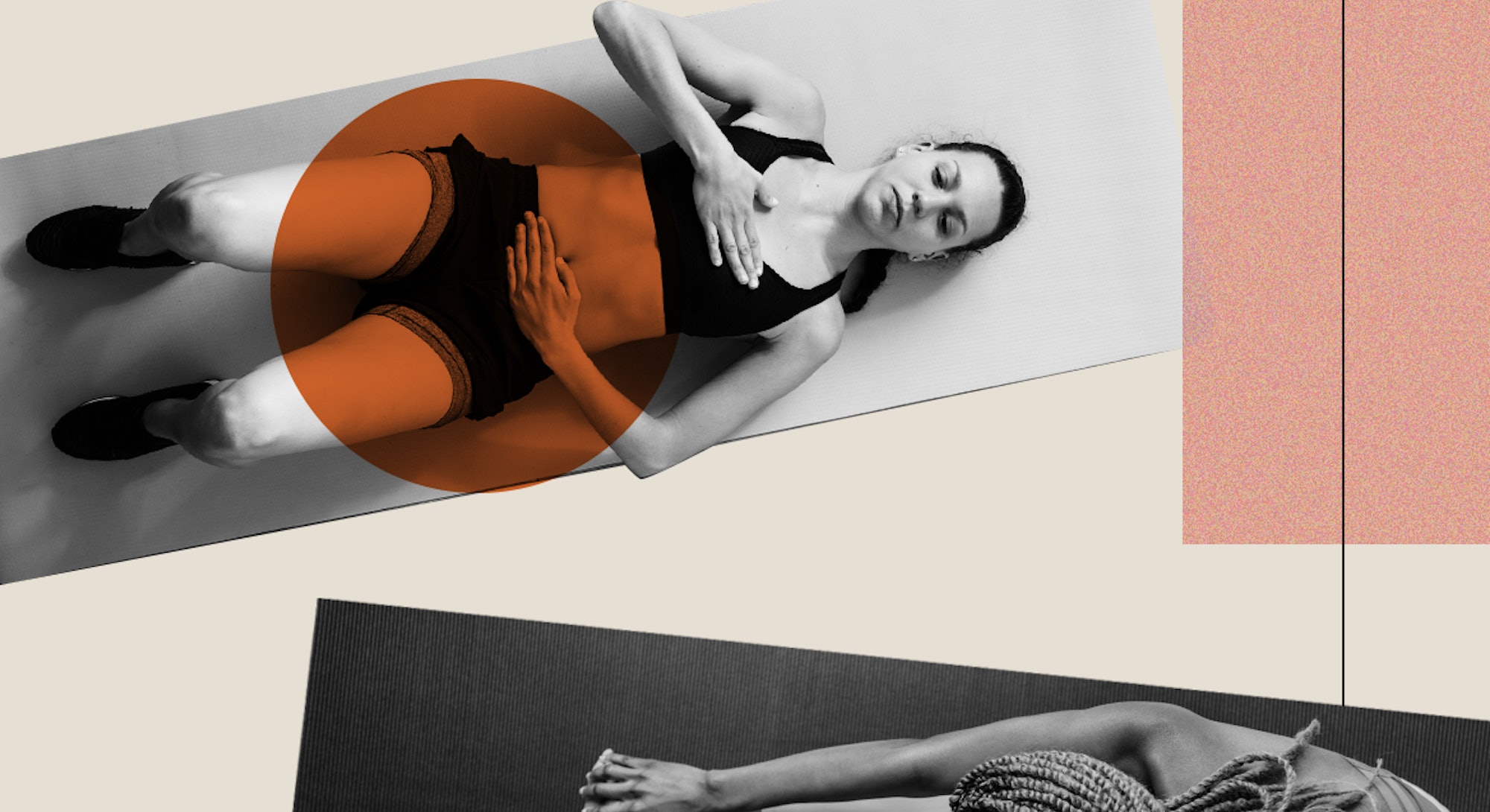 What I Wish I'd Known About My Pelvic Floor

A year after I gave birth, both of my knees had given out, and my hips ached constantly, and something just wasn’t right with my vagina. Conventional wisdom would have me feeling stretched out, but as I started to confide in other new moms, I learned that many of us had the opposite problem. We felt like virgins and were developing an aversion to intercourse. I asked a gynecologist to look and see if anything was broken or if I needed a referral to a specialist. Her diagnosis was that I just needed to relax. So helpful!

Then one mom — I wish I could remember her name so I could publicly thank her, but the brain makes sacrifices during the first year of parenthood — gave me a game-changing referral: a postnatal pelvic floor fitness class. The pelvic “floor” is really more like a hammock, made up of 16 muscles suspended in the pelvis, woven around the vagina, anus, clitoris, and urethra. These muscles are important for everyone: they form the bottom layer of our “core” and are especially important for elimination and sex. But pregnancy, childbirth, and postpartum put unique strain on these muscles: they can tighten or weaken in spots, which can result in pee leakage, pain during sex, hemorrhoids — a basket of troubles, all taboo. One study of new moms at one year postpartum found that one quarter suffered persistent pelvic pain during sex. As many as four in 10 will deal with some degree of incontinence, though estimates vary widely.

My pelvic floor class, Strong as a Mother, was more expensive than yoga and took place in a pilates studio in a faraway neighborhood, but I knew I needed to do something. This wasn’t officially rehab, as is famously standard in France, where new mothers are typically offered 10 one-on-one sessions with a physiotherapist who may use diagnostic tools like biofeedback and do internal work. Pelvic therapy is part of standard training there; in the U.S., one needs to find a physical therapist who’s gone the extra mile with additional training. Had my gyno thought to make a referral, I might have found a pelvic floor PT, which insurance might have covered. But Strong as a Mother was not.

Our teacher, Zoe Bowick Levine, began class by having us lie on our backs (some of us with our babies lying beside us). We breathed in slowly, letting our bellies expand, and then exhaled slowly but fully, making a “shhhhh” sound, allowing our bellies to sink back in until the air was gone and muscles had no choice but to engage. It was much more subtle than what I was expecting; these belly breaths were like anti-crunches. And they definitely weren’t Kegels. “There, stay soft, don’t clench,” Levine would say, her hand on my navel. What we didn’t want, she explained, was to feel our abs hardening outward; we wanted our bellies to sink in, and only when we were completely out of air, to feel for deep, internal connections. “The softening is where the power is.”

I started to get it. And practice at home. Within a month of class, I felt my core wake up, my lumbar spine regain an arch. I remember the exact squat when I felt my butt pop back out like a bunny’s tail (Levine’s imagery) — I realized I had been tucking it in since giving birth, just as she explained when she modeled the “sad puppy” mom walk for us one day (hunched over, tush tucked — the posture that results from a thousand stroller pushes, feeding sessions, reaches into a crib. “That leads to pain, and core and pelvic floor dysfunction,” says Levine.

Isa Herrera is a longtime pelvic floor physical therapist who opened one of the first practices in New York in 2005, and has since trained physicians, midwives, and fitness trainers in pelvic health, including Levine. Herrera had a severe case after the birth of her first and only child: “I was leaking, I couldn’t sit to breastfeed. I was in so much f*cking pain,” she says.

She went to doctor after doctor in search of help; they would prescribe antidepressants, painkillers, even Botox injections. Then she had an epiphany: “I realized I had been approaching it all wrong. The vagina is a muscle, and if it’s like every other muscle in the body, why am I not treating it as such?”

The “sad puppy” mom walk — hunched over, tush tucked — results from a thousand stroller pushes, feeding sessions, reaches into a crib. “That leads to pain, and core and pelvic floor dysfunction,” says Levine.

Lindsey Vestal, an occupational therapist and owner of The Functional Pelvis, a private practice in Manhattan, likes to use the metaphor of a trampoline. The pelvic floor should expand downward, forming the hammock, but also release upward. “When you inhale, the diaphragm softens, drops down like a parachute, and the pelvic floor responds, lengthening and softening. When you exhale, it’s the inverse,” she explains. “So instead of talking about Kegels, we should talk about breathing.”

If the pelvic floor muscles are too loose and unresponsive — or if there are points of tension, like the knots you might get in your shoulders — you might leak pee. Your hips might ache. Sex might be painful. “Your delivery can be traumatic in a way that nobody expected,” says Julie Wiebe, a Los Angeles-based sports medicine physical therapist specializing in the pelvic floor. One of the pelvic floor muscles, she tells me, can extend to 250% of its normal length during your baby’s exit. “It actually defies everything we know and understand about how muscles lengthen.”

No need to think of childbirth as inherently traumatic, these experts say, but it tends to be physically (as well as emotionally and spiritually) transformative. Most people who’ve given birth just get a six-week postpartum appointment, at which they’re “cleared” for exercise and sex. Levine told me she created Strong as a Mother “to pick up where you get dropped off the cliff” of maternity care.

“I think we have to help women appreciate that it took a long time to get that body to change, and it’s going to take a long time to get it back,” Wiebe says. The rectus muscles at the center of the abdomen separate during pregnancy — they need to make room for those much celebrated bumps. Part of why your pelvic floor needs extra attention after childbirth is that it's working overtime to compensate for your weakened abdominal muscles. Not everyone needs professional therapy, and there’s a lot one can do from home (more on that below).

The pelvic floor whisperers are worried that in our current cultural focus on “core strength” — in sucking in our stomachs or doing Kegels all day long — we’ve possibly set ourselves up for worse injuries in childbirth, because we’ve made the muscles too tight — and inflexible. Wiebe even sees young runners and Crossfit enthusiasts with incontinence issues.

One of the pelvic floor muscles can extend to 250% of its normal length during your baby’s exit. “It actually defies everything we know and understand about how muscles lengthen.”

If you’re constantly “belly gripping,” Vestal says, you’re putting downward pressure on your pelvic floor, “asking it to carry more weight,” like cinching an invisible corset. At a certain point, the pelvic floor will basically give up. “You’re kind of causing your own prolapse,” she says.

In a way, my doctor was right: I did need to relax — I needed to relax my pelvic floor muscles. But no amount of Kegels would have helped. “Before they can do Kegels, most of my clients need to restore their connection to their body, they need to meet their pelvic floor,” Vestal says. “Once you restore that connection, maybe you’re a candidate. But let’s soften and relax the body first so we can do a proper lift.”

Thankfully, pelvic floor physical therapy is a growing specialty, and more and more informed trainers and yoga instructors in the U.S. are offering group fitness classes that teach effective techniques. If you’re pregnant and already having symptoms like leaking or vaginal pressure, you can — and should, the experts say — ask for a referral right away. “It’s a common part of pregnancy, but it’s not normal,” says Herrera, who treats women at the other end of the lifespan, who are dealing with prolapsing organs, hysterectomies, and mesh surgeries. “The one thing they all say they wish they had known is how heavily involved their pelvic floor muscles were in their symptoms, because then they could have done something about it.”

Strong as a Mother will soon launch online classes, and Herrera offers an online group coaching program called Female Pelvic Alchemy, as well as the occasional free master class webinar. Vestal is offering a two-hour online course, “Kegels That Work,” (spoiler alert: it’s not focused on Kegels) at an affordable $39.

When I took Levine’s class, she assigned specific exercises to do on our own. Now, she tells me, her focus has shifted to helping new parents incorporate more movement into everyday life. According to Levine, there's an easy way to do this: “Turn floor-sitting into your new best friend.” Get down on the floor when you’re with your baby, when you fold laundry, when you answer emails. Sitting in a chair “locks up” the pelvis, says Levine. “It throws off the whole body alignment. Getting to the floor is just one easy daily way to keep asking for space and movement of all your parts.” On the floor you can sit in a straddle, with legs apart; extend one leg, with the other folded toward you. Or do a half-squat, with one knee up and the other leg folded. Even getting up and down will help “turn the lights back on,” as she puts it, in those areas that have forgotten how to move and support. Your standing desk will still be there when you're ready.