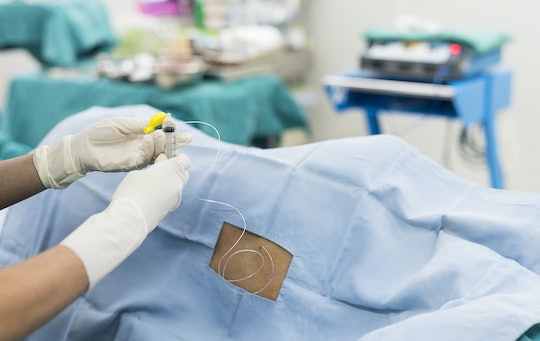 I have given birth four times in my life, and each time I had the epidural needle. I know it's not for everyone, but when I was in labor I felt a deep, abiding love for the epidural. It was my best friend. And I guess best friends can turn on your sometimes, because this woman had an epidural needle stuck in her spine for more than a decade. The thought of this will obviously haunt me until the end of my days.

Amy Bright of Jacksonville, Florida, gave birth back in 2003. That's right; she had her youngest son Jacob almost 15 years ago. She was given the epidural needle during delivery, which is the most common type of anesthesia used during labor and delivery in the United States. Generally speaking, there tends to be a few hours worth of residual topical pain after the epidural is administered, and there can often be numbness in your limbs that make it difficult to move around unattended. But Bright experienced something else entirely; she told First Coast News that she immediately felt severe pain in her back and leg. And that pain did not subside for more than 14 years, as she told the media outlet; “It feels like fire, like a poker next to my tailbone. And then on occasion, it shoots down the left side of my leg on my calf, like my calf side, and then down and into my foot.”

Romper has reached out to Bright's attorney and the Naval Hospital in Jacksonville, Florida for comment and is waiting for a reply.

There was a reason the pain never subsided; after relocating to Texas, Bright had a CT scan that found a 3-centimeter fragment of the needle lodged in her spine. Bright alleges that the staff should have noticed that the needle was broken and should have notified her of the possibility that a segment of it was still in her spine. This could have saved her 14 years of pain. As Bright's attorney noted in a lawsuit alleging medical malpractice, fraud and negligent concealment by the Naval Hospital in Jacksonville, Florida:

When you pull out the needle, you look at the needle and make sure that tip is there. That’s missing. It’s documented in her medical records that they had an unsuccessful spinal needle attempt at Naval Hospital Jacksonville in September of 2003. So no one else put a needle in her back.

According to American Pregnancy, an epidural is "a regional anesthesia that blocks pain in a particular region of the body. The goal of an epidural is to provide analgesia, or pain relief, rather than anesthesia, which leads to total lack of feeling. Epidurals block the nerve impulses from the lower spinal segments. This results in decreased sensation in the lower half of the body." While American Pregnancy notes that some people can experience ongoing pain or permanent nerve damage, that is not usually the case.

Unfortunately for Bright, that is her new reality. The nerve damage is reportedly permanent and expected to worsen over time, and Bright is justifiably furious. Especially considering this was a mistake that could potentially have been corrected if anyone had told her about it, as she told People:

I was absolutely livid and upset and scared. Every time I move and walk and bend and twist and sleep, that needle moves inside my spine. For 14 years, I’ve been creating scar tissue in my spine from this needle moving. I’m angry.

As if it isn't hard enough to have a baby, but to walk around with a fragment of an epidural needle in your spine for 14 years?