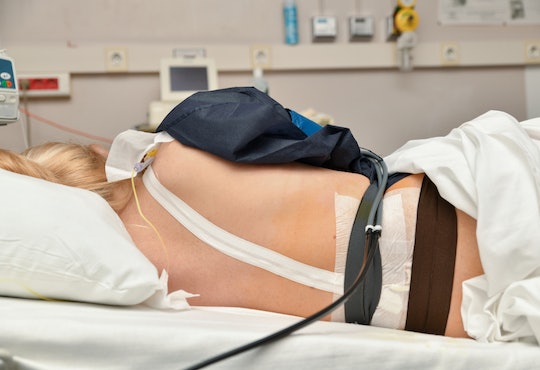 This Is How Your Epidural Site Should *Not* Feel After Childbirth

An epidural may seem intimidating: it does, after all, incorporate anesthesia, needles, and your spine, which sounds like a terrible band name as well as a recipe for being squicked-out. However, they should not generally be feared as discomfort is followed by effective pain relief, and you won’t “go under,” so you’ll still be conscious for the delivery. But what should your epidural site not feel like after giving birth? While it’s highly unlikely that an epidural will cause serious issues after birth, there can be side effects, many of which are normal, and some of which are rarer and should be brought to the attention of the doctor.

I am a bit of a health-worrier, so I want to assure my fellow symptom Googlers out there: epidurals are generally extremely safe. It’s “one of the most effective, safest and widely used forms of pain management for women in labor," according to the American Society of Anesthesiologists, and that serious complications are extremely rare. Any side effects you might feel are likely normal and should go away.

First of all, what kinds of feelings are normal and not cause for worry? "It’s not unusual to expect some soreness, some aching, and some discomfort after the procedure. There's often some swelling and inflammation, so we tell patients that they may experience that discomfort," says Dr. Mitchell S. Kramer, OB-GYN, Chairman of Obstetrics and Gynecology at Huntington Hospital, and Assistant Professor at the Donald and Barbara Zucker School of Medicine at Hofstra/Northwell, whom I spoke to over the phone. "We also tell patients that they can typically take Tylenol or use ice packs to help alleviate discomfort. Some people may experience a little bruising as well, so all of that is normal and nothing to panic about," he further explains.

A typical reaction is to have minor soreness, a bit like a bruise, at the insertion site,” Deena Blumenfeld, a pregnancy educator, tells Romper, which is normal she says, of any injection site that involves a small catheter or tube. You might even feel "a backache covering a wider area," she says.

“Some women have discomfort in the lower back (where the catheter was inserted) for a few hours or days after the epidural, but it doesn’t last," according to the The American Society of Anesthesiologists. Blumenfeld says that if you feel this "backache covering a wider area," that you can expect these sensations to last a few hours to even a couple days. "Contact your doctor if they do not go away, or if they get worse," she advises.

Uncommon symptoms following an epidural will be markedly noticeable. "It’s unusual to experience severe pain, very severe swelling, any oozing from the site or bleeding. In addition, any severe headaches, blurry vision, weakness of the legs, or high fever are rare occurrences, but all these things would be something you'd want to alert your doctor to, because they would possibly be indicative of something requiring medical attention," Dr. Kramer says. “If the site feels hot to the touch, there are red streaks in the area or if you have a fever, these can be signs of infection," Blumenfeld says.

The NHS lists other signs of unusual complications that may merit contacting your medical provider, including headaches that seem to be brought on by movement, numbness, pins-and-needles, or unusual sensations in your limbs, or bladder and bowel control issues that arise following the epidural.

One concern women often have is whether an epidural can cause paralysis. While it is technically possible, it's incredibly rare and often treatable. "I’ve been practicing obstetrics for 30 years," says Dr. Kramer. "I’ve never seen a patient with paralysis resulting from an epidural. It’s a known complication, albeit rare, and anesthesiologists are required to let you know about it. But it’s so rare, it’s not something you need to be overly concerned about. I’ve done over 5,000 deliveries and I've never seen one case of it." He explains, "The most common cause for it would be if there’s a hematoma and it compresses the nerve endings, and would cause paralysis, which is generally not a permanent condition and would be self limited," meaning once the hematoma (a collection of blood from a blood vessel) is resolved, the paralysis will typically go away.

While it’s uncommon that serious complications arise from epidural injections, it’s understandable to take this health concern seriously, and your doctor/OB-GYN will be there to address your concerns.