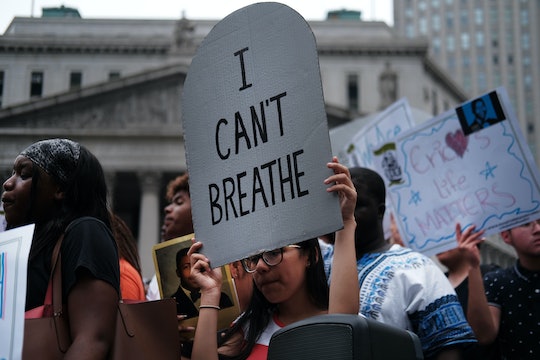 Voters who watched the second night of the Democratic debates Wednesday heard the name Eric Garner invoked time and time again. Several Democratic presidential candidates mentioned his name more than once, with New York Sen. Kirsten Gillibrand and New York Mayor Bill De Blasio both mentioning visits with his mother in recent months. Unfortunately, Eric Garner's family fight for justice goes far beyond one night of a presidential debate, and it's time for his family to finally see their fight come to fruition.

Eric Garner died after an altercation with two New York police officers in 2014, according to Vox, with the entire moment being caught on video. His death was credited with galvanizing the Black Lives Matter movement at the time, and his death resonates to this day. Perhaps especially because one of the officers involved in the altercation, Officer Daniel Pantaleo continues to be employed as a member of the New York Police Department to this day.

Despite having been filmed putting Garner in an alleged chokehold in the 2014 video, according to CNN, Pantaleo remains a police officer. And there are many people who hold New York Mayor and Democratic presidential candidate Bill De Blasio accountable. According to The Hill, hecklers in the audience in Detroit, Michigan on Wednesday shouted out "Fire Pantaleo!" as De Blasio delivered his opening statement, proof positive that no one is interested in letting Garner's family continue on without justice.

In June, Pantaleo went through a disciplinary hearing, according to The New York Times, rather than a criminal one in relation to Garner's death. He remains on the police force, and Garner's youngest daughter Emerald Garner has made a move to take matters into her own hands: she has started a Change.org petition called Fire Daniel Pantaleo that 100,000 people have already signed. As she wrote on the petition:

Hello I am the youngest daughter of Eric Garner, Emerald Garner, please hear my message and continue to stand with my family through this trying time. My family and I have stood by for 5 years waiting for a decision from the Department of Justice. They asked us to let them “investigate” the murder of Eric Garner. What other evidence does one need to convict a murderer who was filmed in broad daylight killing an unarmed man?! My dad screamed “I can’t breathe!” 11 times. #WeDemandJusticeNow

De Blasio addressed the controversy surrounding Pantaleo on Wednesday, even tweeting his appreciation for the hecklers at the Democratic debates. "To the protestors in the audience today: I heard you. I saw you. I thank you," he wrote on Twitter. "This is what democracy looks like and no one said it was pretty."

De Blasio noted that he plans to bring Eric Garner's family justice within the next 30 days, according to Vox. Whether or not he follows through remains to be seen, but it's clear his family and their supporters will keep fighting for justice.