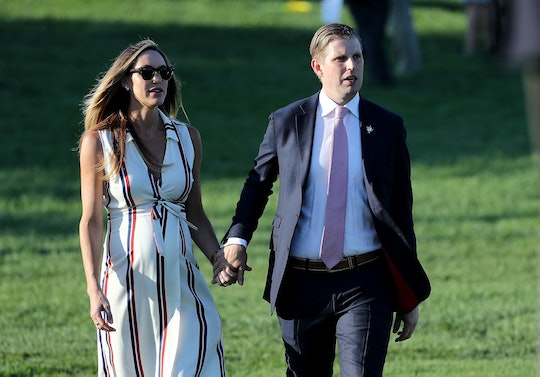 The Trump family has just grown by one as President Donald Trump's second oldest son Eric Trump and his wife Lara have welcomed their second child this week. The couple announced late Monday night on Twitter that they've welcomed a baby girl, who makes the POTUS a grandfather of 10.

"@LaraLeaTrump and I are excited to welcome Carolina Dorothy Trump into the world," Eric wrote on Twitter. "We love you already!" On Tuesday morning, Eric followed up his birth announcement with a hospital photo debuting his new family of four, including Carolina's big brother Eric "Luke" Trump, who is almost 2 years old. Lara shared the same photo on Instagram, writing: "Family of FOUR!"

Carolina's arrival brings Trump's grandchild total to 10, according to USA Today. The POTUS has five children in total but only three have children of their own. Trump's youngest daughter Tiffany Trump, who's 25, is in her second year of law school in Washington, D.C., according to Business Insider, and 13-year-old Barron Trump is still in middle school. As for those who have children, President Trump's oldest son, Donald Trump Jr., has five children with his ex-wife Vanessa: Kai, 12, Donald III, 10, Tristan, 7, Spencer, 6, and Chloe, 5. Meanwhile, Ivanka Trump has three children with her husband, Jared Kushner: Arabella, 8, Joseph, 5, and Theodore, 3.

As of Tuesday afternoon, President Trump had not publicly commented on the birth of his new granddaughter, though some family members had shared their congratulations, including Ivanka Trump who wrote on Twitter, "We love you Lara, Eric, (big brother) Luke and sweet Carolina!"

Lara announced that they were expecting their second child back in April on Instagram and Twitter featuring a family photo complete with their two dogs. "BIG NEWS," she wrote on social media at the time. "Baby number two coming this August!! All of the boys are excited to become big brothers!!" Eric added on to this with his own tweet saying, "Lara and I are excited to announce that we will be adding another member to our family in August! Luke will be a great big brother!"

While the couple's lives are certainly going to be busier with a newborn, both of them are deeply involved in Trump family businesses and organizations. Eric, along with his older brother Donald Trump Jr., run the Trump Organization, while Lara is a senior advisor to her father-in-law's reelection campaign and current producer host of Trump's "Real News Update," according to People and TODAY.

Lara and Eric have been married since 2014, according to Us Weekly, after tying the knot in Mar-a-Lago, the exclusive luxury resort in Palm Beach, Florida that President Trump has called his "southern White House," according to Politico. Eric and Lara welcomed their first child in 2017, according to E! News, also sharing the news on social media at the time.

President Trump occasionally posts about his grandchildren on social media, so only time will tell if he'll commemorate the arrival of his tenth grandchild on Instagram or Twitter.