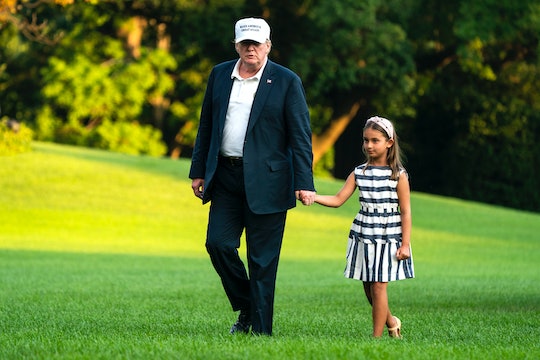 Donald Trump Will Soon Be A Grandfather Of 10

Given the news that one of President Trump's sons is expecting another child, it's fair to wonder how many grandchildren Donald Trump has now that the first family is growing again. Three of Trump's five children have kids of their own and often share about their families on social media and in interviews.

Meanwhile, President Trump's 25-year-old daughter Tiffany is currently in her second year of law school in Washington, D.C., according to Town & Country. And Trump's youngest son, 13-year-old Barron, is still in middle school, according to TODAY. Trump's older children (41-year-old Don Jr., 37-year-old Ivanka, and 35-year-old Eric), however, have all started families of their own over the years.

And on Wednesday, April 10, according to Page Six, Trump's son Eric announced on social media that he and his wife Lara are expecting their second child together. With this addition, President Trump will soon be a grandfather of 10 come August 2020. Until then, though, here's a look at his grandchildren thus far.

Donald Trump Jr. Has Five Children With His Ex-Wife, Vanessa

Don Jr. is not only the oldest Trump son, but he's also the first of his siblings to have children. The 41-year-old and his ex-wife Vanessa have five children together, according to Redbook. There's 11-year-old daughter Kai, 10-year-old son Donald Trump III (or Donnie), 7-year-old son Tristan, 6-year-old son Spencer, and 4-year-old daughter Chloe. Kai is a golfer, just like her grandfather, and has an Instagram account devoted to her love of the sport.

After their divorce was finalized, the parents released a statement saying that their children would always come first, according to People. "We are incredibly lucky to have five amazing children and are committed to raising them together," they said. "Our kids and their happiness will always be our first priority."

President Trump's oldest daughter Ivanka and her husband Jared Kushner are both advisors to the POTUS and are the parents of three young children: 7-year-old daughter Arabella, 5-year-old son Joseph, and 3-year-old son Theodore, who Ivanka gave birth to in the middle of campaign season during the 2016 Presidential Election.

Ivanka has not stated whether or not she wants more kids, and admitted to People in July 2016 that she was a little exhausted.

Trump's third oldest child, Eric, announced on Wednesday that he and his wife, Lara Trump, are expecting their second child together. "Lara and I are excited to announce that we will be adding another member to our family in August! Luke will be a great big brother!" Eric wrote on social media.

Eric and Lara are already parents to a 1-year-old son, Eric "Luke" Trump, according to People. Lara is expected to give birth this summer, but they haven't shared whether they're having a boy or a girl.

So with all that said, President Trump will soon have a total of 10 grandchildren.

More Like This
Alex Guaranschelli Is A Renowned Chef, But Her Daughter Still Gets Recipe Inspo From TikTok
David Moscow Gave His Mom Two Grandkids & She's Still Holding Recipes “Hostage”
Keke Palmer Casually Drops Her Baby's Sex On Jimmy Fallon
Josh Duhamel Is Glad He Took Fergie's Advice About Dating After Divorce
What Parents Are Talking About — Delivered Straight To Your Inbox