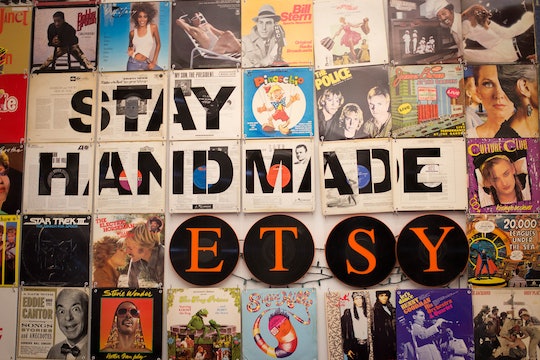 Craft giant Etsy has just updated its paid leave policy — and it's a win for workers across the United States. As soon as April 1, all 800 Etsy employees will be able to take up to 26 weeks off following the birth or adoption of a new child, up from the 12 weeks they were previously given. Etsy also removed all mention of "primary" and "secondary" caregivers from their paid leave policy after realizing it was reinforcing gender norms. Since most millenial families consist of dual-income households, there really isn't such a thing as a "primary" or "secondary" caregiver these days, and Etsy's new paid leave policy should send an important message to companies across the U.S.

"Male employees read the policy and thought, 'I must only be eligible for secondary,'" Juliet Gorman, director of culture and engagement at Etsy, told The Huffington Post of their old policy. As so-called secondary caregivers, they would only take five weeks off of work. "It was playing out in a gendered way."

Etsy didn't shy away from admitting that one of the reasons behind a generous parental leave policy is to remain competitive in hiring. "A generous, fully-paid parental leave policy is a competitive necessity for a company like Etsy," Gorman wrote in a blog post that introduced the new policy. "The goal of attracting and retaining the best talent is not, however, the only reason to craft a policy like ours."

Mothers are less likely to be promoted and earn an average of $11,000 less than women without children (and $13,000 less than fathers), according to The New York Times. But research has also shown that paid parental leave can help shrink this "motherhood penalty" — as can more progressive policies that encourage fathers to also take parental leave.

"The best hope we have for getting rid of these effects," sociology professor Michelle Budig told The New York Times, "is policy that very much conveys that people have the right to coordinate work and family."

By beefing up its parental leave policy, Etsy just took a great step towards that. As more companies embrace progressive policies, the country moves closer to having them become the norm.