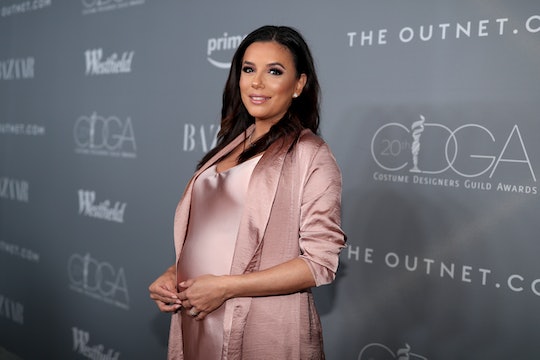 It never ceases to baffle me when people assume that little boys and men can't be feminists. I mean, the whole concept of "feminism" centers on the idea of equality — not women hating men or desiring some worldwide domination over all males. So, of course men can be feminists. There are plenty of them across the nation, in fact, who are fighting alongside their female counterparts for things like equal pay, equal opportunity, and equal representation without fear of violence or harassment. Many of these feminist men are celebrities — and children of celebrities, even. In fact, Eva Longoria said she'll raise a feminist son, according to People, and hell yes she will.

With the help of L’Oréal Paris, the 42-year-old actress/activist/producer shared a powerful video on Instagram on March 8 — the International Day of Women, as People reported. “This #WomensDay I’d like to thank the future generations of women (and men!) who will pick up the baton and carry on the fight for gender equality,” Longoria captioned the post. In cased you missed the big news, Longoria is expecting her first child, a baby boy.

In the video, she explains why she's excited that's she'll soon be raising a son. “We have this wonderful wave of future feminists coming into this world with a different view of what this global community we live in should look like," Longoria says. "I’m so excited that I’m having a boy because I think the world needs more good men."

She continued in the video:

This boy, my son, will be surrounded by very strong, educated, powerful women and I think it’s important that he sees those types of role models in his life so he knows how to support it, how to applaud it and how to honor it.

Of course, it's not exactly news that Longoria is feminist AF. After all, she was among the celebrities who spoke at the Women's March in Los Angeles on Jan. 21, the Daily Mail reported. "What we're calling for is sustainable and systematic change to the experience of women and girls in America. A change from fear and intimidation to respect. From pain and humiliation to safety and dignity. From marginalization to equal pay and representation," Longoria said to the crowd, with fellow celebrity feminist, Natalie Portman, by her side. She continued:

This experience we demand — one of equality and justice — must be an issue that threatens corporate bottom lines, and it has to threaten elected positions. Only then will they see the transformative and permanent change that we seek.

Longoria's baby news, on the other hand, is still relatively new. In December, E! News reported that Longoria was pregnant with her first child with her husband Jose Bastón. Less than two weeks later, she posted an adorable New Year's Day bump photo — making her baby news Instagram official. "New year, new adventures! I’m so grateful to my beautiful family for giving this new baby so much love already!" Longoria captured the sweet snap.

I have no doubt in my mind that Longoria will raise an amazing son whose feminist AF — just like his mama. What many people don't understand about the word "feminism" is we're not a group of men-hating women who want to steal all of dudes' jobs. Feminists stand for equality and fairness, regardless of a person's sex, race, gender, sexual orientation, etc. We want fair pay. We want to be able to live our lives and do our jobs without the fear of being sexual harassed, marginalized, and belittled. Why this is such a difficult concept for some people to grasp — and why many are passionately anti-feminist — is beyond me.

So yes, I too will be raising my two daughters and my son as feminists. Because as Longoria said, the world could always use more good men.