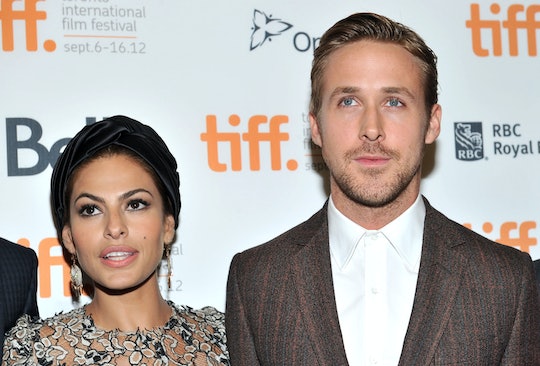 Eva Mendes Says Her Daughters Believe In Santa, But Not One Who's Always Watching

The Santa Claus question is a big one this time of year. Not every parent is on board to foster a belief in the big man in red, and even when they are on board everyone tends to go about it a little differently. Celebrities are no different. Take Eva Mendes, whose daughters do believe in Santa Claus, but not in that way where Kris Kringle is making his list and checking it for naughty kids or anything. It seems that Mendes and her partner Ryan Gosling are all about a benevolent bringer of seasonal surprises.

Mendes and Gosling have been together since they were co-stars in the 2011 film Place Beyond The Pines. They welcomed daughter Esmerelda in 2014 and little girl Amada in 2016. Now that the New York & Company designer's daughters are getting a little older, Mendes opened up a bit about holiday traditions in their household. This is a relatively new thing for Mendes, who has been sort of famously private about her life with her children and Gosling in the past.

In a new interview with People, Mendes opened up about wanting to recreate Christmas from her childhood for her own daughters, explaining that her mom really went all out for her as a girl. "My mom went really big with me when I was little. She would make Santa noises while we were asleep. Really sweet stuff. Now that I’m a mom, I just appreciate so much, like all the wrapped presents," she told the magazine. "[My mom] would hide some presents, and so I’m taking on some of her traditions and taking them to my daughters.”

While Christmas morning is clearly a pretty big deal in her house, Mendes told People that she and Gosling have avoided using Santa Claus as a threat to their kids to be on their best behavior, telling the news outlet that she doesn't "use [Santa] that way."

This feels vaguely ironic considering Gosling's infamous Santa Baby skit from Saturday Night Live in 2015. You know, the one where he and Vanessa Bayer play a couple who are very devoted to their belief in Santa Claus. Like more devoted than any adult anyone ever, probably. I know it's a skit but still, it's worth noting, even if just for a laugh.

While Mendes and Gosling might be fans of Santa Claus, not every celebrity parent subscribes to the notion of encouraging their children to believe in a man coming down the chimney on Christmas Eve with a bag full of toys and a belly that needs all the cookies. Gabrielle Union and her basketball player husband Dwyane Wade, for instance, are not selling the Santa Claus story to their own kids, although Union might want that to change in the future. As the Bring It On actress said in an interview with O magazine, she might want to tell kids Santa brought their presents but Wade is not having it: "My husband is like, 'There's no way in hell I'm letting these kids think that old white man is sneaking into our house and doing anything for them.'"

So there you have it, folks. Celebrities really are just like us. They're trying to find a little seasonal balance between their own childhood memories and what they want to teach their kids. It's a process, and it sounds like Eva Mendes is pretty content where she sits on the topic of Santa Claus.