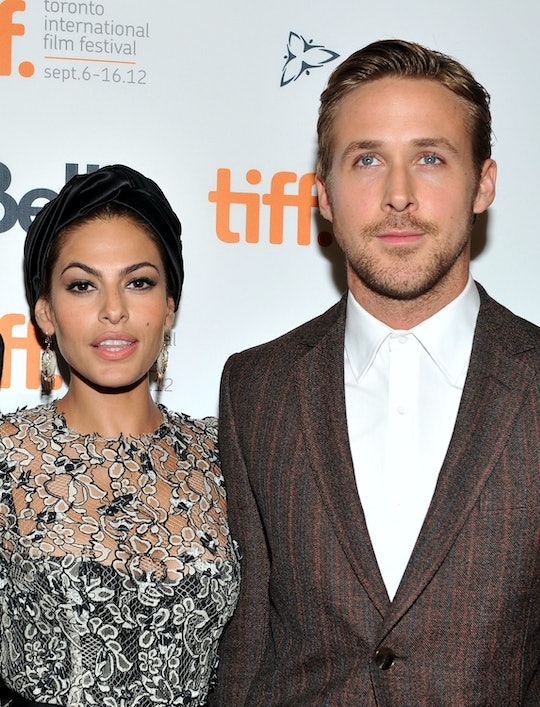 At this rate, it's safe to assume that there must be something in the water out in Hollywood. In exciting news on Thursday afternoon, Us Weekly reported that actress Eva Mendes was reportedly pregnant again, according to multiple sources. It's the second child for Mendes and partner of four and a half years, actor Ryan Gosling.

The news follows closely on the heels of several other exciting Hollywood announcements, including the birth of Kelly Clarkson's second child, Remington Alexander, and rumors that actress Blake Lively and husband Ryan Reynolds were also expecting again. According to Us Weekly, sources close to Mendes and Gosling claimed that Mendes had been hiding a growing baby bump during a photoshoot back in February. Romper has reached out to the actress' rep for confirmation and is awaiting a response.

The couple are a notably private duo, rarely stepping out together or with their first child, Esmeralda, who was born in September 2014. Mendes and Gosling first met and began dating after working together on the film The Place Beyond the Pines in 2011. According to one source that spoke with People in 2014, the fact that the couple kept news of their first pregnancy low-key was not surprising.

"[Eva] just hasn’t ever wanted anyone beyond her close friends and family knowing more than they had to," the source claimed. "And Ryan is certainly private and always has been."

Still, fans will take morsels of info where they can get them. In a surprisingly candid interview with Wendy Williams last October, Mendes dished on what parenthood was like with a big Cuban family to support her. "It's like a takeover," she joked. "The Cubans are coming. It's amazing. They take the baby, there's food, the dishes are done. It's a beautiful takeover."

In that same interview, the mom of (then) one also explained her and Gosling's decision to name their daughter Esmeralda. "We love Hunchback of Notre Dame," she quipped, according to Pop Sugar, adding,

We loved the name, the cartoon, and the novel, you know — it just kind of kept coming back to us. It's actually a very popular Latin name so it's easy for my father and certain family members that still don't speak English to pronounce. That was a good selling point.

In the wake of this week's pregnancy rumors, one source claimed to E! News that Mendes was already in her second trimester. That's great news for fans eagerly awaiting the arrival of the next Mendes-Gosling bouncing baby, but perhaps a bit more stressful for the couple, since they now have less time to figure out a way to match the name "Esmeralda" in awesomeness. Whatever the case, congratulations are most certainly in order.