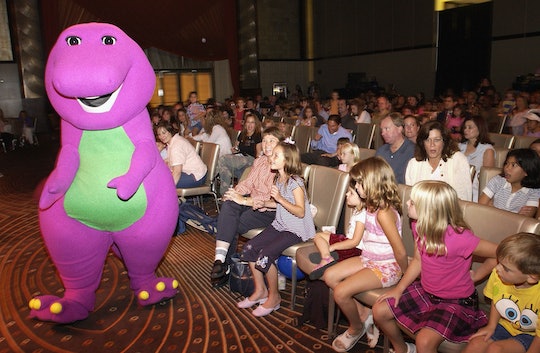 What would the '90s have looked like without that big, grating purple dinosaur? Reminding all '90s kids to learn to count, to brush their teeth, and be kind? How many kids from the '90s still know all the words to I love you/you love me/we're best friends like friends should be? All of them, that's how many. And just when you thought the world might have forgotten that big old, surprisingly agile, purple dinosaur, it seems that is not the case. Because the man behind Barney just did an interview, and it's going to give '90s kids the good old, Saturday-nostalgia feels.

David Joyner played Barney the Dinosaur from 1991 to 2001. He managed to dance about with a surprising amount of grace in the cumbersome purple dinosaur suit on television and in live performances for an entire decade. Of course, he didn't start out as a dinosaur. He actually earned his degree in electronic engineering technology, worked for Texas Instruments as a software analyst, and even acted as a live mannequin. But in an interview with Business Insider, he admitted he always knew he wanted to end up on TV:

When I was a kid, I wanted to be on television so bad. I would stand in front of the television and basically lip sync.

Little did he know how he would end up fulfilling his dream. Singing and dancing inside a dinosaur costume with children.

Joyner auditioned for the part, and was offered it almost immediately. He told Tech Insider that playing Barney was "no accident," and that he truly believed he was "supposed to do this character." But it wasn't always easy. Particularly trying to perform inside that heavy costume:

Being inside this costume is pretty cool. Now Barney is about 70 pounds, and it can get over 120 degrees inside. So inside you're sweating profusely. It's a t-rex, so you're basically just up to your elbows in being able to move. And then also, Barney's feet were huge. Now I did have some sneakers inside that were glued to the bottom of the feet.

Of course, there's one thing '90s fans really want to know about playing Barney; how did he handle that song?

The one that continues to haunt many a parent's dream, including this parent right here? Apparently, Joyner didn't sing the song (that was voice actor Bob West) but he still loves the message of harmony it spread:

Now a lot of times you hear those words, and some people like, "Oh my god, that song," and I'm like, "No, no, no" listen to it. I love you, you love me. We're a happy family. So now, we're now gathered together in this beautiful harmonious thing that’s happening. So it's a beautiful thing to know how that song has impacted pretty much this next generation.

After playing Barney for a decade, Joyner decided to head for Los Angeles to try his hand at acting without the suit. He has appeared on The Young and the Restless, Shameless, ER, and That '70s Show. These days he has a regular gig as a hip-hop, rapping teddy bear. But he will always have fond memories of Barney.

You know what this means, don't you? It turns out he really did love us, and we loved him. Just like the song said. Now we can all rest easy.