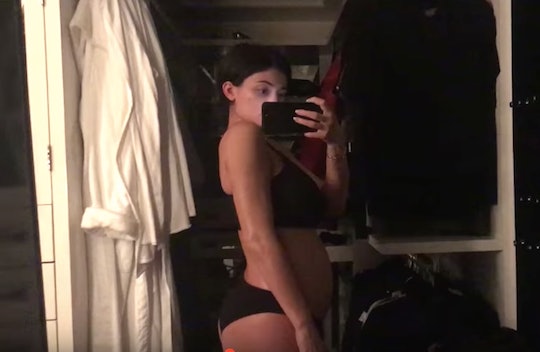 In case you somehow managed to miss the big news, Kylie Jenner took to Instagram on Sunday to announce the birth of her daughter after months of rampant speculation about her pregnancy. Jenner, who kept a very low-profile throughout her pregnancy for the sake of her baby, also shared a video documenting her special experience to accompany the major announcement. And it's safe to say that Kylie Jenner's pregnancy video cleared up many rumors floating around these past nine months, which just goes to prove that her fans should probably take any future tabloid stories about her with a grain of salt.

Prior to Jenner dropping the news about her baby (the world is still waiting on a name, btw), her fans hadn't heard one peep from her for months. The silence was unusual for Jenner, who prides herself on being the unofficial queen of media, and many of her most dedicated supporters didn't know how to handle her disappearance. And it's pretty reasonable to theorize that tabloids and anonymous sources took advantage of the fan curiosity and confusion by putting out a ton of unfounded rumors that the pregnancy video, titled "To Our Daughter," ultimately debunked.

So, what gossip did the video tackle, intentionally or unintentionally? Check it out below.

She & Travis Scott Were On The Outs

Throughout the past few months, there were a lot of rumors suggesting Scott was an uninterested dad-to-be who was constantly at odds with Jenner. In January, a report from Hollywood Life surfaced claiming that the two were fighting "non-stop" over "various things" and that Kanye West had to step in at one point to ease the tension. “Kanye made it clear to Travis that he needs to step it up big time," a source told Hollywood Life at the time.

Welp, based on the video, it's safe to say Jenner and Scott were just fine throughout the pregnancy. From Scott attending Jenner's doctor appointments to shots of the two canoodling all over the place, it's obvious they weren't on the verge of breaking up this entire time.

Not to mention, there were also rumors that Scott and Jenner got into a bitter fight about where to spend Christmas day. As you can see in the photo above, Jenner and Scott happily spent the holiday together. In the video, Scott can be seen giving Jenner a sweet Christmas gift for the baby and the two even exchanged a flurry of kisses at dinner.

She Wasn't Happy With Her Looks

One of the prevailing theories as to why Jenner kept her pregnancy quiet was that she felt "self-conscious" about her changing body.

An insider told People back in November:

Her body is changing and she’s very self-conscious about it. She’s always been insecure that she’s not as curvy or pretty as her sisters. Kylie is only trusting her closest friends and her sisters right now. She wants to reveal things on her own terms but she’s of course having fun teasing everyone.

But in the video, Jenner appears to proudly flaunt her bump for family and friends, and she seems absolutely ecstatic about her pregnancy body. Jenner even donned a bunch of revealing ensembles in the vid, including a tight red dress. If Jenner had been so upset about her looks while pregnant, you think she would have covered up or hid in her room until she gave birth.

Of course, it would have been completely OK if Jenner had been uncomfortable with her pregnancy body. Every person is entitled to feel however they want to about their pregnancy and looks.

Kim Kardashian Was Jealous Of Her

The most upsetting rumor of all, in my opinion, was that Kardashian was jealous of Jenner's pregnancy. Rumors swirled that Kardashian, who struggled to conceive Saint West and who can no longer safely carry another child, was supposedly upset with how easily Jenner became pregnant her daughter.

A source claimed, according to People:

Her first reaction was, 'Seriously?'" the source told the publication. "She didn't respond well at first. It's like she and Kanye [West] had gone on this whole journey to get pregnant for months, and now this happens to Kylie. She teared up. It definitely took a lot of time for her to process it.

Not only did Kardashian debunk the jealousy rumor with her own tweet, but she also appeared thrilled for Jenner in the video. Kardashian makes a cameo in the vid at least a handful of times, and at one point, she can be heard counseling Jenner on her post-delivery vagina. What are sisters for, right?

She Was Lonely Throughout Her Pregnancy

For most of Jenner's pregnancy, she was painted as a lonely figure upset with the lack of support from Scott. In reality, however, Jenner was surrounded by her friends, family, and Scott most of the time. From Jenner's lavish baby shower filled with her pajama-clad BFFs to her never being alone at a doctor's appointment, there was no shortage of love in Jenner's house while she was awaiting her little one. Lucky lady.

She Was Rumored To Have A C-Section

In mid-January, a report from Radar Online claimed that Jenner was suffering from pregnancy "complications" and that she may need to have a c-section.

“She is due in late February or early March and she is having some minor complications right now that may force her to deliver the baby C-section,” the supposed insider said, according to Radar Online.

As you can hear in the video, Jenner gave birth vaginally. In fact, a nurse and Kris Jenner can both be heard encouraging Jenner through labor. And although some conspiracy theorists might argue that it's suspicious that the screen went black during the labor, I don't think it's suspect at all. Jenner probably wanted to keep that private moment private.