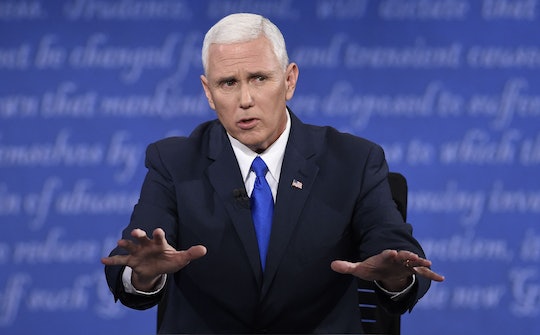 Every Mike Pence Lie From The Vice Presidential Debate

It's not something to be proud of, but it's usually safe to assume that when politicians speak, they sometimes lie. And if you follow politics in general or even just this most recent election cycle, it was especially easy to pick out every lie that Mike Pence told at the vice presidential debate. It's sort of shocking, actually. Pence definitely has a tough job in that he has to look like he's united with his running mate Donald Trump, but also be the brains of the outfit. When Trump says something that sounds a little extreme, like calling a woman's weight "a problem" or rubbing elbows with Vladimir Putin, it's his job to walk it back a bit.

And walk it back he does. Pence can be hard to read — he seems like an average guy, with a low, soft voice who probably has a closet full of Christmas sweaters that he doesn't wear ironically. But some of his Pence's positions are pretty extreme, especially when it comes to women's reproductive rights. And for a guy who speaks at length about his faith and Christian values, he doesn't seem to mind that he spends a lot of time just straight up covering for Trump and wiggling around the truth. It's like nothing he says is a lie, it's just not true. (Yea, it doesn't make sense to anyone else either, don't worry.)

Here are some of the big lies that Mike Pence proudly told on Tuesday night.

No, it doesn't. According to recent financial disclosures, Trump has actually used Foundation money to buy things for himself or pay for his campaign. And even if it did all go to charity, they're illegally raising money in New York state. Attorney General Eric Schneiderman ordered the foundation to cease and desist fundraising this week for not being registered in the state or undergoing mandatory audits, according to CNN. So, really, no one has any idea where Trump Foundation money goes at all.

Tim Kaine went hard at Pence for Trump's relationship with Vladimir Putin and a comment that Pence made to CNN's Dana Bash that he thought Putin was a "stronger" leader than Obama. The two vice presidential candidates got into a semantic debate about the difference between "better" and "stronger," but Pence can't just deny the ticket's respect for the Russian dictator. According to The Washington Post, Trump has said that he respects Putin's methods of governing and has even made a state visit and appeared on Russian television. Pence said tonight that Trump never said that, specifically. Which is just not true.

The ban on Muslim immigration has been central to Trump's campaign and the policy is even outlined on his website. He's started to walk back the severity of the ban recently, but NPR noted that Trump's plan to keep America safe is to keep "radical Islamists" out. The same goes for refugees; Trump's son Donald Jr. recently got in trouble for posting a meme comparing refugees to Skittles, as reported by CNN. So again, Pence might want to get familiar with his running mate's ideas.

Hillary Clinton Pulled Troops Out Of Iraq In 2011

In an attempt to blame the rise of ISIS in Iraq, Pence said that Clinton caused the chaos by choosing to pull troops out too early. Luckily, Kaine came to Clinton's defense, because that's entirely not true. It was actually the Bush administration that negotiated a withdrawal plan with Iraq's prime minister Nouri al-Maliki, way before Clinton was ever Secretary of State or was entirely in control of what was happening in Iraq. Pence might have needed more binders to study from during his prep last week.

Everyone Should Just Relax

Perhaps the biggest lie of all from the debate was when Pence suggested that Trump has a plan for the country. It's true that Trump released a tax reform plan and has some ideas about banning (or not banning) certain kinds of immigrants, but other than that, voters haven't heard very detailed plans about anything else. Even Trump's foreign policy and ideas on how to defeat ISIS are top secret, as noted by The Washington Post. So no one knows whether Pence is lying or not when he says that Trump knows what he's doing.

I get that it must be hard for Pence to keep up with Trump, who is tweeting and taking interviews all the time, sometimes even contradicting himself. But some of the things Pence said on Tuesday were just factually incorrect. It's a shame that there's only one vice presidential debate, because more follow up questions for Mike Pence (and Tim Kaine) would be useful.