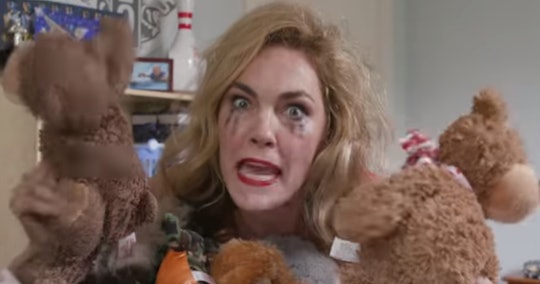 Ever since Taylor Swift dropped that little known new song called "Look What You Made Me Do," from her upcoming Reputation album, people have been talking about it. Mocking it, loving it, doing parodies of it... the reactions have typically run the gamut. But there's one viral Taylor Swift parody video that will strike a chord with moms in particular, because it is eerily on point. And sort of perfect.

Deva Dalporto, the mom behind My Life Suckers, where Dalporto has created several other viral parody videos, saw Taylor Swift's video for her song "Look What You Made Me Do" and felt immediately inspired. Because she saw something in Swift's song that was clearly begging to be parodied, of course. But also because followers, fans, and even fellow bloggers contacted her to say that she needed to parody this song in particular right away. As she explained in her behind-the-scenes video on YouTube:

The minute Taylor Swift put out her video, I got tons of requests asking me to do it. I got messages from followers and other bloggers with awesome lines and ideas. The original is such an amazing, insane video, it was perfect to parody. It was the first time I’ve put on a pair of fishnet stockings in forever.

The video opens with Dalporto climbing up from behind a child's bed, mascara running down her face and her hair mussed, singing:

I. Don't. Like to play bedtime games. Don't like the tantrum stage. The hours you made me play. On the floor. No I don't want to.

It gets even better from there. She dances around in the aforementioned fishnet stockings, two back-up dancers in her midst, singing about grime covering everything in her house. Not to mention that slime stuff that all kids seem to be obsessed with right now. And mommy brain... she gets it about mommy brain. Dalporto sings:

As you got smarter I got dumber with my mommy brain.

She laments cleaning up poo, a mile long list of chores that's never finished, and looking like an extra from The Walking Dead. And that whole, "I'm sorry, the old Taylor can't come to the phone right now. Why? Because, she's dead!" line that we all know so well?

Dalporto's does it so well:

I’m sorry, I can’t come to the phone right now. Why? BECAUSE I HAVE KIDS.

Fans have been loving Dalporto's video; it's been viewed on YouTube 575,000 times since it debuted on Sept. 13 and will most likely keep on climbing. It's so chock full of great lines that you have to watch it through two or three times before you can fully appreciate all of those sweet, juicy mom tidbits thrown in. And the video references (from the snakes to the zombie-esque look) abound.

And when you get tired of this parody, there are so many more great ones to watch. My personal favorite? A parody of Bruno Mars' "Uptown Funk," called "Suburban Funk." All about big box stores, good school districts, and yoga pants.

Dalporto, who was a senior editor for Nickelodeon's parenting site, has become an icon in the fan parody video game. ABC tweeted in May that there should be a Billboard award for Top Fan Cover Artist, because Dalporto should be nominated. Unfortunately, it's not a category... but perhaps it should be. I've had more fun watching these videos than the originals, to be honest. Dalporto's videos have been viewed more than 250 million times so far.

Perhaps it was a good thing that her husband had the presence of mind to buy her a video camera and encourage her to use it. Think of what we would be missing without it?