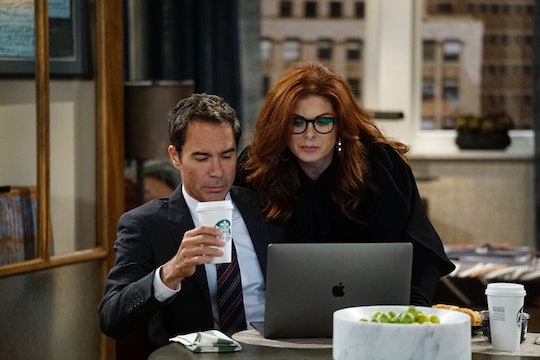 The first episode of the Will & Grace revival, "Eleven Years Later," is heavy on the political humor, making sure the audience knows just how grounded in the present day the series is now. Barely a minute goes by without a joke about the current administration, as is proven when you round up every Trump joke the Will & Grace revival made during the Season 9 premiere. There were a lot.

Will and Grace kept all their cultural references current, from throwing around terms like "woke" to declaring unsavory anecdotes "fake news." They both tried to stay true to their liberal beliefs, but two different opportunities — one professional and one personal — arose to test their dedication. Karen was a close personal friend of Melania Trump (and wholeheartedly embraced Trump as president, presumably torturing Grace about it in her off time like her own personal American Horror Story) and this led to Karen landing Grace a job redecorating the Oval Office. Meanwhile, Will debated the ethics of hooking up with a politician whose beliefs made him sick. The whole thing culminated in an Oval Office pillow fight.

The Trump jokes running throughout the episode varied from the very subtle to the extremely broad, and here they all are just in case you missed one of the many.

No, With A Beret

The quips started immediately during game night, when Will gave Grace the clue "rich hostage" and she naturally guessed "Melania" before landing on the right answer: Patty Hearst. The only difference, of course, is a beret.

When Karen had to be shaken out of her fugue state with a rattle of pills, she offered up her famous catchphrase — with one key addition. "What's happening, what's going on, who won the election?" she demanded, to which the rest of the gang chorused, "Your guy."

"I used to be woke," Grace lamented to Will after learning of his strongly worded letters to a conservative congressman. "Now I use my p*ssy hat to sneak candy into the movies." That's just multitasking, Grace.

Karen being besties with Melania Trump (whom she affectionately called "Melanio") got a lot of attention throughout Episode 1, whether Karen was taking Melania's late night calls or signing Grace's name to a birthday card for the Trumps. Karen explained that Melania needed their help decorating because Trump believed his new office was a "real dump" and it was giving him night terrors. As for what Trump was looking for? "A fluff," Karen said. "He wants it to look like he's there from time to time."

According to poor Grace, Karen screamed "Lock her up!" every time Grace wore something to work that Karen didn't like.

Little quips and references were sprinkled throughout the episode, too, from Grace's door reading "Madame President" after her name to Debra Messing briefly doing some scrunched-up Trump lips during a fight with Karen. Jack also took to using Kellyanne Conway's name in vain when spotting a hottie, and Karen even emulated Conway's famous Oval Office couch pose.

In another throwaway line, the White House staff member who caught Will and Grace arguing bemoaned the fact that she couldn't "watch another husband and wife fight in this office." Wonder who she was referring to.

From Russia, With Love

The contents of President Trump's desk, according to Will & Grace: a Russian-to-English dictionary and a fidget spinner.

When Grace needed to match the new curtains in the Oval Office to Trump's distinct coloring, she merely pulled out a handy color reference: a bag of Cheetos.

The poor beleaguered White House staff member played by Kate Micucci fired off plenty of jokes in her brief appearance. First she explained that Will didn't need to pass any security protocols before his tour because, "Rules don't mean anything in this place anymore." Then she welcomed Will into the Oval Office using the president's specifically requested terms: "The owner would like you to know it's the best oval office you'll ever see."

Will wondered why anyone would even bother redecorating the Oval Office when it would just be redone in a year.

Grace got the last word when she left behind a little gift for the president on his chair: a hat that read "Make America Gay Again."

Will & Grace didn't hold back when it came to the Trump jokes in its premiere episode, proving that the show had definitely moved into the modern age.