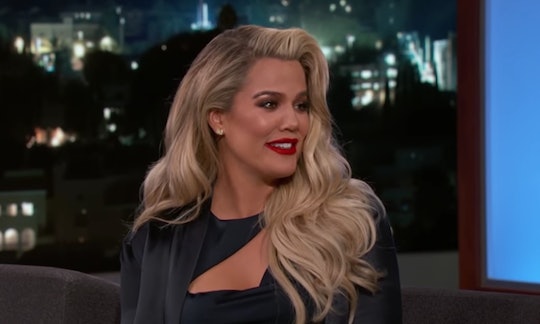 Everything Khloé Kardashian Has Revealed About Her Pregnancy So Far

After it was first reported that Khloé Kardashian was expecting her first child with boyfriend, Tristan Thompson, the oh-so-talkative Kardashian sister went silent. For months Kardashian refused to address the rumors or say too much, until she finally confirmed the news last month. Since then, it seems like Kardashian has not been able to stop talking about her exciting news (thank goodness!). So you have to agree that everything Kardashian has revealed about her pregnancy so far is super exciting, especially since her silence for the last part of 2017 spoke volumes.

Kardashian made the long-awaited announcement on Dec. 20 through a touching Instagram post, showing off her bare bump and calling her pregnancy "her greatest dream realized." "I had been waiting and wondering but God had a plan all along," Kardashian wrote in the photo's caption. "He knew what He was doing."

It has been less than a month since Kardashian said those words, which were the first things she ever said about her pregnancy — and, to the delight of fans, she has said so much since then. You can tell that Kardashian's pregnancy was definitely her greatest dream realized. Here is just a taste of everything she has said about her pregnancy (so far) and her new addition arriving this year.

1. What It Was Like Keeping Her Pregnancy A Secret

In an interview with E! News, Kardashian recently revealed that keeping her pregnancy a secret for all of those months was hard. Not only did she have to keep it from some friends, but people (unfairly) attributed her bump to weight gain. Kardashian told E! News:

I will say that it's a huge relief that I've announced my pregnancy in general. Sometimes when people are like, "Oh you're fat, you're this, you're that," and you're like "Oh I feel like sh*t, and I'm pregnant."

2. How She Found Out She Was Pregnant

In an interview with Access Hollywood, Kardashian revealed the exact moment she found out she was pregnant. Kardashian said:

Tristan kept saying "I think you're pregnant." I was just feeling so different, I can't explain it. And Tristan was teasing me, but I guess he was semi-serious and he said "I think you're pregnant" and I was like "there's just no way." And then I asked my assistant, "Alexa, you have to get me a pregnancy test." And Tristan was actually out of the country, and I did it and I was freaking out. I was freaking out.

3. The First People She Told About Her Pregnancy

In the same interview with Access Hollywood, Kardashian said that the camera crew for Keeping Up With The Kardashians were some of the first people to know about her pregnancy, since they were filming the whole thing. Her assistant, Alexa, was also one of the first people to know. Thompson, meanwhile, was out of town. Kardashian told Access Hollywood that Alexa and the film crew were the only people who knew about her pregnancy for two weeks until Thompson came back in town and she finally broke the news to him, and later to her friends and family.

During an appearance on Jimmy Kimmel Live!, Kardashian revealed some details of her birth plan to Kimmel — she will be having her baby in Cleveland, Ohio (where her boyfriend lives and plays basketball) but her whole entire family might not be in the delivery room with her. Kardashian told Kimmel that Thompson would be the first priority, followed by her mom, Kris Jenner, then "whoever would annoy [her] the least" in the delivery room. "Watch out, Ohio," Kardashian added.

During an appearance on The Ellen DeGeneres Show, Kardashian told host Ellen DeGeneres that she had some ideas for the name of her baby although she was keeping the sex of the baby a secret for the time being. Kardashian said, according to People:

6. Her Thoughts On Finding Out The Baby's Sex

In that same interview on The Ellen DeGeneres Show, Kardashian told DeGeneres that she and Thompson were waiting to find out the baby's sex, but would need to know eventually. Kardashian said, according to E! News:

There are too many surprises in this whole thing. I'm definitely going to know.

7. Her Thoughts On Maternity Advice

During that same appearance on Jimmy Kimmel Live!, Kardashian revealed to Kimmel that her sister and mom of three, Kourtney Kardashian, has been the source of the most advice she has received since becoming pregnant. Kardashian said, according to People:

I don't know if it's the worst, but Kourtney gives a lot of advice. I think it's so sweet but I don't want to do some of that stuff. You can never have a plastic toy, ever! If someone buys blocks, I'm allowed to have blocks! Let me experience things. It's either her way or no way. It's not what you say, it's how you say it. We've been fighting a lot lately. We never fight.

Through Instagram and Twitter, Kardashian revealed that she was "officially" six months pregnant on Jan. 2. This means that Kardashian is due some time in the spring, possibly early April, according to E! News.

9. Her Plan To Continue To Work Out While Pregnant

Kardashian has been consistently working out while pregnant, documenting all of this on Snapchat. Because of this, Kardashian has faced some criticism from people who claim she shouldn't be working out for health reasons. But during a recent interview with Entertainment Tonight, Kardashian talked all about how she plans to continue to work out well into her pregnancy. She said, according to Entertainment Tonight:

It's bizarre to me that people don't want me to be happy and stay healthy and fit. My doctor wants me to work out every day if I could, so I'm doing doctor's orders and I feel good. Whatever you do before your pregnancy, you're allowed to continue, and they say it leads for a better delivery. I feel great and I would feel horrible if I was sitting around, overeating all day.

10. Her Thoughts On "Looking Pregnant"

During the same appearance on The Ellen DeGeneres Show, Kardashian revealed that she hated her first trimester of pregnancy and all of her other pressing thoughts about being pregnant. Kardashian told DeGeneres, according to People:

At the beginning, the first trimester is the worst and no one knows you're pregnant yet and you feel the most uncomfortable. I think once people know you're pregnant, you get all the excuses. Hopefully I look pregnant, not just fat. It's hard for me to breathe right now. I'm gonna try to not wear maternity clothes for as long as possible.

11. Her Fears About Her Changing Body

In a Snapchat on Sunday, Kardashian revealed that she has one very big fear about her pregnancy body — watching her belly button pop from an "innie" to an "outie." Kardashian said in a video on the app:

I have such a phobia with belly buttons and I know when you're really pregnant your innie will become an outie. Oh my god, I can't even think about that. I'm so grossed out by that.

In the next three months, fans can only hope that Kardashian will keep everyone up to date and reveal a bit more about her very exciting first pregnancy.