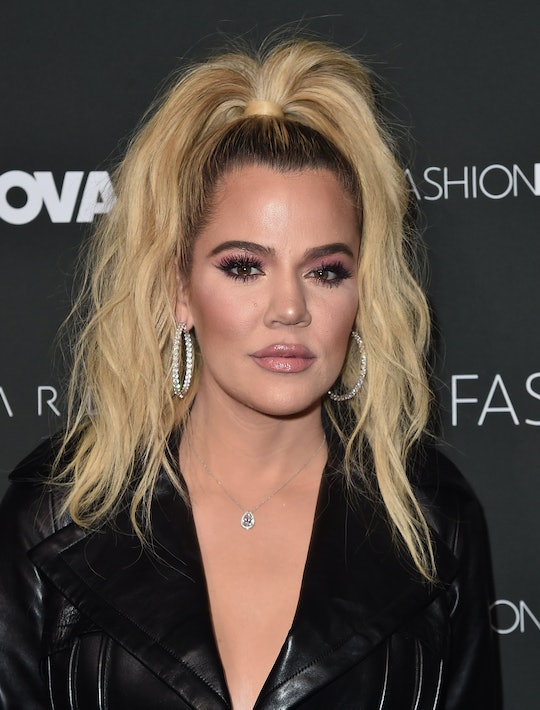 Here's What Khloe Kardashian Thinks Of Her Sisters As Moms

Khloé Kardashian became a mom for the first time in April, after she welcomed daughter True with Tristan Thompson, but by then, she'd already amassed plenty of experience with kids. That's because by the time of True's arrival, three out of Khloé's four sisters had also become moms, and now, reports suggest that at least one more Kardashian baby may be on the way, if Kim Kardashian and Kanye West's surrogate is indeed pregnant. In other words, life in the KarJenner family seems to be all about babies these days, and everything Khloé Kardashian has said about her sisters as moms shows that, when it comes to parenting, the star definitely looks to up to her siblings' examples.

As one of six siblings, Khloé definitely knew a thing or two about little ones well before she ever became a mother herself. With more than 10 years between her and her two youngest sisters, Kendall and Kylie, she would have spent her early teen years around babies (Khloé was even in the delivery room when Kylie was born in 1997, according to Harper's Bazaar), and with both Kim and Kourtney being moms of multiple children, it actually isn't that surprising that, in a blog post back in April, Khloé revealed that she's actually "seen over eight births live and in person."

By the time Khloé became pregnant with True, she already had plenty of people turn to if she had any questions. But while she seemed happy to try and take the experience of being a first-time mom in stride, she did explain on a post on her app in April that, while she may not necessarily want to emulate any one sibling specifically, according to Us Weekly, she was pretty impressed by all of them overall. Khloé wrote,

My sisters are all such phenomenal moms! I can’t say exactly what advice or skills I'll be taking from them, but I'm going to remain awe-inspired by how they can handle it all ... Just by observing them as moms, I've already learned so much.

She Might Have A Soft Spot For Kim In Particular, Though

Even though Khloé was trying to keep an open mind about her future parenting strategy while she was pregnant with True, she did admit to People in August that there is perhaps one person she preferred to ask for words of wisdom for her then-3-month-old. Khloé said,

You get so much advice when you’re becoming a new mom. I have to say that Kim probably has given the best advice because she's not judgmental about any of it. She offers up different ideas and either you take it or leave it and that's okay.

In fact, that non-judgmental approach, coupled with Kim's general mom-style, even led Khloé to ask Kim to be her baby's legal guardian if need be, bypassing her sister, Kourtney. In a September episode of Keeping Up With The Kardashians, Khloé explained,

Watching Kimberly be a mom, I really respect her parenting skills. Not that I don't respect Kourtney's —  I relate to how Kim parents more. But at the end of the day, this family is so close, and we love each other so much, and if anything, God forbid, were to happen, I know my daughter's in the best of hands, no matter who her legal guardian is.

Although Khloé seems to relate better to Kim when it comes to being a mom, it's clear that, no matter what, she still has Kourtney's back. In January, pregnant Khloé told Jimmy Kimmel that she and Kourtney had been fighting over their different takes on pregnancy and child care, according to People, and said,

Kourtney gives a lot of advice. I think it’s so sweet but I don’t want to do some of that stuff. You can never have a plastic toy, ever! If someone buys blocks, I’m allowed to have blocks! Let me experience things. It’s either her way or no way.

Khloé also admitted that the two had argued over her desire to have a TV in her baby's nursery, and said, "She thinks she's better than I because she doesn’t watch TV but I like TV shows."

Opinions on blocks and TVs aside though, Khloé still clearly has a lot of love for her big sis, especially when it comes to navigating co-parenting. When photos of Kourtney on vacation with her kids, her ex Scott Disick, and his girlfriend Sofia Richie surfaced online in December, Khloé promptly retweeted them, and wrote,

This is co parenting done right!! Beyond proud of all of them!!!! This is LOVE!! Your children before anything else!! All amazing adults right right!!!

As experienced mamas, it makes sense that Khloé may have looked up to Kim and Kourtney for guidance, but it sounds pretty clear that she has a really special bond with her youngest sister. Though Khloé had helped keep Kylie's pregnancy a secret until her daughter, Stormi, was born, Khloé shared a sweet throwback photo in February of the two of them posing together while pregnant, according to People, and wrote,

Congratulations My Sweet Kylie. What a magical ride it’s been! I’ll miss you bumping along with me. Never in a million years did I think we would do this together but it’s been that much more special because of it.

Kylie had also revealed that it felt important for her to have Khloé in the room during her delivery, and told The Evening Standard in May that her sister is "just very, very nurturing," and that "she really helped [her] through the whole thing."

Being there for Kylie obviously meant a lot to Khloé too, but since she also happened to be pregnant at the time, well, it also sounded a bit intense. In a post on her app in April, according to E! News, she wrote,

I'd say the most significant experience was when I watched Kylie give birth. I was six months pregnant, so it was a lot more real because I knew I'd have to do that in three months. It became a lot more memorable and I definitely took in every single thing that was happening. You don't miss a beat when you know you have to do it soon.

Given that being pregnant is something that all women experience differently, there really isn't any way for anyone else to prepare you for what to expect. But, as Khloé seems well aware, it's still nice to have people around whom you trust for when you need a little wisdom and support.

Now that her daughter True is already 9 months old, Khloé herself has likely learned plenty about motherhood. But hearing how proud and supportive she is of her siblings as parents is totally heartwarming.