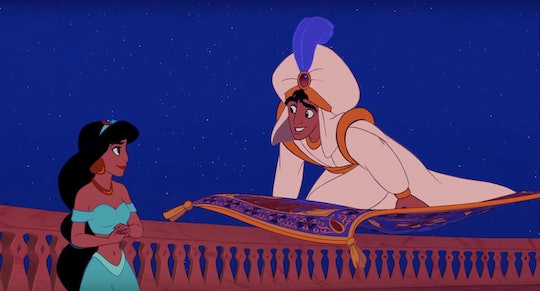 Everything We Know About The New 'Aladdin' Movie So Far

Animated Disney films are essentially "classic" movies at this point for many millennials who grew up watching the stories play out on the big screen. Now, more than 20 years after the release of these films, they're coming to life with live-action remakes. Aladdin is the latest film to get a makeover, following the success of The Jungle Book and Beauty and the Beast in recent years. And at the D23 Expo in Anaheim, California this past weekend, all the important details that fans should know about the live-action Aladdin movie so far were finally revealed — and it's all pretty exciting, to say the least.

The D23 Expo is the one place for all major announcements related to anything Disney. Once a year, Disney executives gather together with fans in one place to announce new additions to the Disney line-up and release some major developments. In addition to any major news about additions to the Disney theme parks, the biggest thing to come out of D23 is generally the movie news — and this year, the news surrounding the Aladdin live-action film, along with other movies like Mary Poppins and The Lion King, stole the show. The film about the lovable "street rat" Aladdin and his efforts to woo Princess Jasmine (with the help of a magic genie), but not without facing an evil villain, is sure to be an instant favorite, so if you're a Disney die-hard here's everything you should know about it, before it hits theaters in 2019.

Two relatively unknown actors will play the lead roles in the film. Power Rangers star Naomi Scott will play Jasmine and Mena Massoud, a Canadian actor born in Egypt, will play the title role of Aladdin. Actor (and sometimes rapper) Will Smith will play Genie, the larger than life character that guides Aladdin in winning over the girl of his dreams. But casting isn't over yet. According to The Hollywood Reporter, Disney is still looking to fill the role for Jafar, the film's villain, and his sidekick, Iago.

Smith's larger than life personality will definitely fit Genie well, and it will be super exciting for these new actors to prove themselves in such big roles. Child actor Neel Sethi was also unknown before being cast in the live-action remake of The Jungle Book, for which he received wide acclaim. Here's hoping this film does the same for it's dazzling new cast members.

Just four days before the cast was announced, there was some controversy surrounding the film. The Hollywood Reporter was the first to report that Disney was struggling to find leads for the film, even after a reported 2,000 actors around the world read for the parts of both Jasmine and Aladdin. According to The Hollywood Reporter, "The test process was a mess." This led to a public outcry, which in all honesty, was not surprising.

At least by now we know that things have resolved themselves. Thank goodness.

Now that the long search is finally over, the movie can begin production. The musical movie will be directed by Guy Ritchie and is set to begin shooting this August in London, England, according to The Hollywood Reporter (by then, the other roles will likely have been cast). In May, however, Ritchie told the Nerdist that he was still unsure of how the movie would turn out. "So I'm still looking for cast members, we still haven't found exactly what direction we're going in. I'm confident that at some stage it will reveal itself to me but right now its just a bit too premature." It's safe to say at this point that things look to be coming together nicely.

While there's still no specific release date for the film, according to Screen Rant, the movie could very well be released by November or December 2019.

In other words, fans may have a bit of a wait ahead of them, but rest assured, it's likely that this new Aladdin film will bring an even bigger and shinier "whole new world" to life.