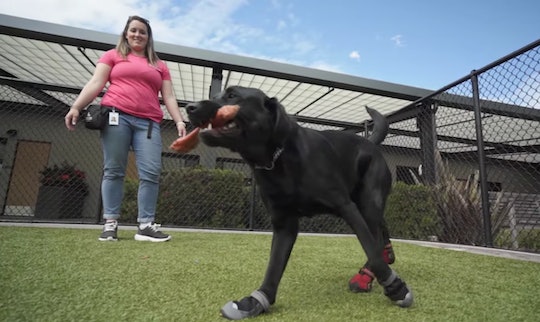 A dog wearing boots? Yes, it's as funny as it sounds. But while you and your children may laugh at how silly these dogs look when they first step out in their brand new kicks, learning to wear boots or booties is actually serious business for the pups on Disney+'s Pick of the Litter. Still, this exclusive Pick of the Litter clip of dogs wearing boots from an upcoming episode of the docuseries will leave you giggling.

Based on the award-winning 2018 documentary of the same name, Pick of the Litter is an original Disney+ series that follows six Labrador Retriever puppies — Paco, Pacino, Tartan, Tulane, Amara, and Raffi — as they train with Guide Dogs for the Blind, a nonprofit a guide dog school. But as the docuseries shows, the road to becoming a guide dog isn't always easy. In fact, sometimes there are moments of real struggle — like learning how to walk, run, and jump while wearing specially designed dog boots, as seen in the exclusive clip from Episode 4 shared with Romper before it airs on Friday, Jan. 10.

"It's really fun watching them the first time they put the booties on because, as you can well imagine, they're like, 'What is on my feet? Get it off!'" Guide Dogs for the Blind CEO and President Chris Benninger tells Romper of watching dogs waddle around awkwardly when they're first placed in boots.

While you and I don't think twice about slipping our feet into shoes before heading out for the day, dogs aren't used to wearing things on their feet. But according to Benninger, learning to be comfortable in boots is an important part of a guide dog's training. "It's a protection," Benninger tells Romper of the boots. "We have clients that live in snowy environments, we have clients that live in Phoenix where in the summertime it's 115 degrees. And our dogs are on the streets along with our clients, helping them to get where they need to go." Because walking on hot, salted, or even snowy and icy sidewalks can be hazardous to a dog's paw pads, guide dogs are trained to be comfortable wearing boots that can protect them.

Although a bit shaky in their boots at first, training via positive reinforcement — and a few awkward first laps around the play pen — soon has these dogs running and jumping in their boots without issue. "Everything that we do in training with our dogs is positive reinforcement," Benninger says. "So what we're always trying to do is make training fun so that our dogs are excited about going to work and that they get rewarded for the positive things that they're doing."

In a statement shared to their Instagram on Monday, Guide Dogs for the Blind celebrated the release of the docuseries' first three episodes. "The first three episodes of the Disney+ docuseries Pick of the Litter featuring Guide Dogs for the Blind are up," the organization wrote. "We are proud to share the story of our life-changing mission and the amazing people who make it happen."

You can catch more of Paco, Pacino, Tartan, Tulane, Amara, and Raffi's guide dog training with Pick of the Litter on Disney+.