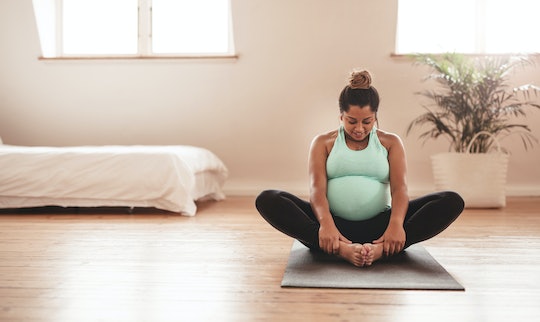 This Exercise Schedule Might Help Speed Up Your Labor, According To Science

After having given birth four times in my life, I think I can safely say that I would have done pretty much anything to make labor easier. Really, anything. Because it really hurt a whole lot, and you're welcome for that understatement of the century. Most moms out there would agree that any research being done to make labor not only easier but potentially faster is research a girl can really get behind. According to this recent study, exercising three times a week might speed up labor, so I guess you should maybe go for a walk this afternoon if you're pregnant.

A new study published in the May 2018 edition of The European Journal of Obstetrics and Gynecology and Reproductive Biology had some exciting news for active moms. Moderate aerobic exercise three times a week can reduce labor times, particularly in the first and second stages of labor (or as I like to call it, the gathering storm of pain). Professor Ruben Barakat brought together researchers at the Technical University of Madrid to study the effect of moderate exercise on labor and delivery. The researchers looked at 508 healthy pregnant women and divided them into two groups, 253 in a control group and the remainder in the exercise group, according to The Independent.

The pregnant women in the exercise group were given an aerobic exercise program to be followed three times a week. After the women had given birth, researchers looked at a number of factors when compiling data; maternal weight gain, the duration of each stage of labor for the birthing moms, general health, baby weight, and the possible use of an epidural during delivery. After weighing all of the factors, the researchers reached a conclusion, according to The Independent:

A supervised physical exercise programme throughout pregnancy decreased the duration of the first phase of labour as well as total time of the first two phases together, leading to a decrease in total labour time.

I know, exciting news. But what sort of decrease in time are we talking about here? According to Babble, labor times in the exercise group were reduced by a full 53 minutes, with the average labor time dropping from 462 minutes to 409. Pretty significant, especially if you're experiencing a lot of pain during labor.

And speaking of pain... researchers also noted that the babies in the control group were more likely to have neonate macrosomia, a condition when the newborn is significantly larger than average, and the mothers reported a decreased use in epidurals during delivery. Another positive point in favor of moderate exercise during pregnancy.

That being said, sometimes it can feel almost impossible to try to exercise while you're pregnant. When you're tired out from trying to grow a human inside you, not to mention carrying around said growing human all day, every day, it can be hard to leap off the couch and go for a quick jog around the block.

Still, the benefits of exercising during pregnancy might be too good to pass up. According to What To Expect, staying active during your pregnancy can:

Staying active during pregnancy is about so much more than just getting that pre-baby body back. It's about keeping you well. And, maybe even better, it might cut your labor time down... win/win, right?