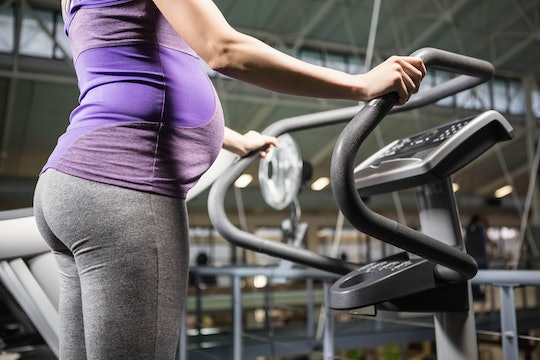 Most soon-to-be moms and their doctors have always known that it's safe to carry on with a fitness routine while pregnant, but that doesn't mean that women don't think about the effect their morning run or squat sessions does to their body and fetus. It's stressful. Fortunately, there's a new study that suggests that exercising during pregnancy can make labor shorter, in addition to all the good things that working out while carrying a bundle of joy can do for an expectant mother's body.

Researchers at the Technical University of Madrid, led by Dr. Ruben Barakat, ran a study with just over 500 women and put them into two groups. There were 253 women who were put into a control group with not a lot of activity and 255 women placed in the "exercise group," according to the study, which was published in the European Journal of Obstetrics and Gynecology this month.

The women in the exercise group did a "moderate aerobic program," once a week for three weeks, which is pretty mild. The researchers then looked at the duration of each stage of labor and the use of epidurals in the groups of women, and found that the women who exercised during pregnancy were more likely to have a decreased "duration of the first phase of labor as well as total time of the first two phases together, leading to a decrease in total labor time," as reported by The Independent. In addition to decreased labor time overall, women who exercised were less likely to use an epidural during childbirth.

But if you can't go all in with pilates (or don't feel like it) during your pregnancy, you shouldn't stress about that either.

This new study just compounds what women everywhere have already always known. If you exercise during pregnancy, you're not doing any harm to your body or your fetus' health. The American College of Gynecologists and Obstetricians has long recommended physical activity, according to its website, noting:

Physical activity in pregnancy has minimal risks and has been shown to benefit most women, although some modification to exercise routines may be necessary because of normal anatomic and physiologic changes and fetal requirements. Women with uncomplicated pregnancies should be encouraged to engage in aerobic and strength-conditioning exercises before, during, and after pregnancy.

So this is something, just because it bears repeating, that doctors have been telling women for ages. If you have a fitness routine and are pregnant, it's best to talk to your doctor about it and make sure that what you're doing is appropriate for your and the fetus' health, but it's likely just fine to keep doing your regular workout routine. Please keep running, going to yoga, and/ or lifting weights.

Whether you do yoga, CrossFit, pilates, life weights, or jog a few miles, you're good to go, as long as you talk to your doctor and they know give you the all-clear. This is why people are terrible when they troll Khloé Kardashian or other fit moms for doing their thing while pregnant. Female bodies are badass — women can have babies and lift weights all at the same time. It's not just safe, but good for pregnant to work out.

Then again, there are tons of women who get pregnant and have never seriously worked out in their lives and have no intention of shoving in some prenatal pilates because there are about 10,000 other things they want to take care of and have always been just fine skipping the gym with their lifestyle. Or, there are women who have to stay in bed for most of their pregnancies due to complications and can't even think about squats due to doctors' orders.

Whether you just don't care to work out or literally will hemorrhage if you stand up, studies like this can be just as annoying (and at worst, damaging) as the women in the park trying to tell you that cloth diapers are the "only" way.

It's best to remember that it was only just over 500 women in the study group, which is not a lot at all. So, yes, given 500 women, half of them who exercised had less of a labor time and might have been more inclined to refuse an epidural, if they worked out once a week. But that doesn't mean that working out will hands down make your labor easier or epidural-free. And if you don't work out at all, just tell your doctor about it. Being pregnant is different for everyone, so own it.