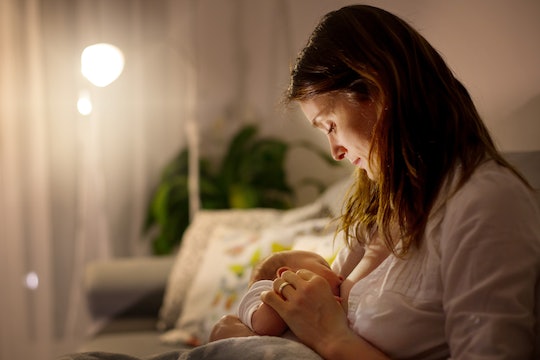 My son was not a great sleeper. It wasn't until he was a year old that he consistently slept through the night. I felt like a complete failure. I read every book about baby sleep habits and sleep training, even asking friends and family for advice in the hopes that my son would sleep more than four hours at a time. I know I'm not alone. Every night, sleep-deprived parents are searching for answers and coming up short. Now there's recent studies that suggest that expecting your baby to sleep through the night at 6 months might be unrealistic, but that begs the question: What should parents be anticipating when it comes to their baby's sleep?

Authors of a study in the December 2018 issue of Pediatrics found that many babies aren't sleeping through the night — or even more than six hours at a time — by the time they're 6 months to a year old. In fact, they discovered that at 6 months, around 38 percent of babies were not sleeping even six hours at a stretch, and only about 57 percent were getting eight hours of uninterrupted sleep each night. At 1 year of age, the researchers noted that over a quarter of infants were still not sleeping six straight hours, and nearly half — 43 percent — were still not yet sleeping for eight consecutive hours.

To me, it seems obvious that such a qualitative analysis of infant sleep behavioral patterns should have been completed by now. Instead, we've had nothing but our fierce reliance on what we in The West believe should be happening to guide us. We're told that it's just the newborn stage that's hard. Once you get beyond that, your baby will sleep through the night, everyone will be well-rested, and then it's onto bigger and better things. That's hardly the case. If it were, sleep training guides like The Happiest Baby on The Block wouldn't be runaway best sellers.

Perhaps parents like me wouldn't have felt so terribly inadequate, if we knew just how uncommon it is for infants to sleep through the night that first year. I cannot tell you the number of nights I woke with my son, crying as hard as he did because I felt as though I was doing something wrong, and he was paying the price. It was compounded later on when my daughter had no problems sleeping through the night. To me, it meant that I'd learned something, that I changed —when in reality, it was only that my children were different. Plus, according to the study, boys are more likely to have trouble sleeping through the night than girls, so that might also have played in her favor.

Marie-Hélène Pennestri from McGill University’s Department of Educational and Counselling Psychology and the Sleep Clinic at Hôpital en santé mentale Rivière-des-Prairies was the lead researcher of the study, and she understands parents' concerns and hopes that her study can offer a semblance of peace during this trying time by letting them know that they're not alone. “Our findings suggest parents might benefit from more education about the normal development of — and wide variability in — infants’ sleep-wake cycles instead of only focusing on methods and interventions, especially for those who feel stressed about methods such as delayed response to crying,” she said. And let's be honest, that's what most of us are doing. We ponder how we can better our techniques and which gadgets will work, instead of focusing on the fact that this is likely a passing phase of childhood, normal and expected.

The study published in Pediatrics focuses on healthy children of healthy parents, which means that if your child has an additional concern like apnea or reflux that's causing their sleep disturbance, it goes beyond the parameters of their study and should be discussed with your pediatrician. However, if you're just the average parent of a healthy baby who loves a good five a.m. dance party, know that you're not alone, and that there likely is an end date to those shenanigans, and according to the study, it's not adversely affecting their mental or physical development. It's really only affecting the bags under your eyes, and possibly the number of times in a week you get to shower.

Thankfully, after a year or a little more, babies start to really hit their stride and start sleeping. My son is now the better sleeper between he and his sister, and at age 10, mornings are getting ever more difficult, and I find myself missing his cheerful early morning smiles as I get the "Why in the heck did you wake me up?" scowls.

More Like This
Double Your Fun With These Instagram Captions For Twin Pics
Why Does My Baby Cough While Breastfeeding? Experts Explain
23 Sweet Quotes To Dedicate To Your Rainbow Baby
30 Marvelous Baby Boy Names That Start With “M”