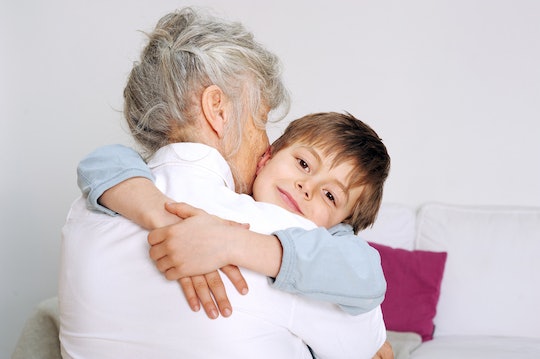 Experts Warn Grandparents May Be Harming Their Grandkid's Health, But Don't Panic

When my brother and I were little, our grandma would babysit us once a week in the summer while our parents were at work. The three of us spent the afternoons sipping from the cans of Coke our mom told her not to let us have, chomping on Bazooka bubblegum (the kind with the comics, obviously), and watching hours of Scooby-Doo, Where Are You! and Walker, Texas Ranger reruns. It was the life, but, apparently in some cases, such indulgences can present a Major Health Hazard. At least, that's the word from University of Glasgow experts who warn that grandparents who are generous with treats may be harming kids' health.

More Like This
15 Face Masks For Kids That Are Cute, Comfortable, & Get The Job Done
If A Tick's Head Gets Stuck When You're Pulling It Out, Here's What To Do
9 Signs Your Child Is Overheated
A Guide To Apple Card Family

It's not exactly a revelation that kids (and everyone else) shouldn't be filling up on junk food all the time. And, yes, grandparents (like mine) have been known to supply their grandchildren with such contraband items, sometimes disrupting the norms of what their dietitian moms (OK, still me) usually allow. But, as The Telegraph reported, in reviewing 56 previous studies from 18 countries that touch on grandparents' effects on their grandchildren's lives, the researchers concluded that it's the grandparents themselves who may be to blame for the grandchildren's potential bad health outcomes and habits.

This is because, according to the study, researchers found that grandparents don't just slip nefarious cans of Coke into these tiny hands, but they also tend to not encourage physical activity and are more likely to smoke around the children.

In the study, published in the journal PLOS ONE, researchers acknowledged that they did not consider the positive emotional benefits for kids of spending time with grandparents. They also recognized that any harm that a grandparent's babysitting decisions could cause are surely not intentional. Still, they pointed out that a sedentary lifestyle, smoking (a habit kids can pick up if they see their grandparents doing it), and, most pressingly, an unhealthy diets can all increase a person's chances of a cancer diagnosis, as iNews reported.

And that's how a group of researchers from the University of Glasgow's Medical Research Council's Public Health Science Unit came to the assertion that grandparents may be a cancer risk for children. But the goal in doing so actually makes a lot of sense. Stephanie Chambers, the lead author on the study, said that, because of the "prominent role grandparents play in the lives of children," public health messaging should do a better job of educating them on how best to care for these little ones, according to The Telegraph. And there's no doubt that health education truly can help people to live healthier lives — and, presumably, help ensure those in their care do, too.

This is especially important, the researchers noted, because the fact that more and more moms are working, high child care costs, and the prevalence of single-parents households all mean that grandparents are taking on increasingly active roles in looking after their grandkids.

Of course, the idea that allowing your kid to spend time with Grandma and Grandpa could one day land him or her with cancer is a little extreme. Setting ground rules and clear expectations about what kids will and won't do when spending time with their grandparents can make a world of difference. And in the absence of public health education campaigns aimed specifically at grandparents in the caretaker role, moms and dad can let them know what foods kids should be eating, and provide healthier snack and meal options if necessary.

After all, grandparents who help out by babysitting are doing a huge service for families, and, in most cases, simply want what's best for their grandchildren. And with all that being said, there's definitely nothing wrong with a little Coke and Bazooka bubblegum during a TV-watching marathon once in a while.