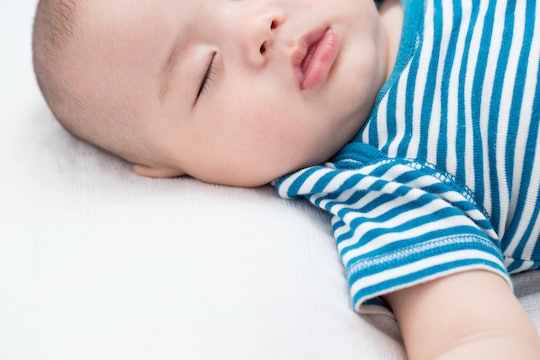 Experts Warn That The DockATot Is Dangerous, But It's Been Lowkey Miraculous For Me

Before my daughter was born this September, I did what all first-time parents probably do: research the most popular baby items on the internet. While googling for that elusive miracle baby sleep product, I kept coming across one device that was touted as a “miracle worker” by moms everywhere (including famous moms like Kim and Kourtney Kardashian). I’m talking about the DockATot: the baby lounger and co-sleeper that so many moms swear by. Would it work for us? Was it safe? If it isn't safe, why are so many people using it? Could we afford it? Is sleep with a baby in the house a lie? I set out to find out.

For the uninitiated, the DockATot is a canoe-shaped cushioned product that claims to “reinvent the womb” by creating a snug and warm environment for babies. It functions as a lounger for naps, an optimal place for tummy time, and a co-sleeping device for parents who want to bed-share (which, I note, goes against the American Academy of Pediatrics' (AAP) extensive safe sleep guidelines).

Therein is the tricky part: Parents love it during the day, when everyone agrees it is safe and helpful, and wind up becoming attached to it at night, when experts do not condone its use.

I was a little reluctant to try the DockATot at first. I knew that the AAP recommends that babies be put to sleep on their backs on a firm surface, located in the parents’ room, but not in their bed — a sleep recipe that many parents find is nearly impossible to stick to when you add a baby who loves to fight sleep into the mix. Dr. Rachel Prete, a pediatrician at Arnold Palmer Hospital for Children, tells Romper by email that, "Although the product is portrayed as a safer sleep alternative, I think it can create a false sense of security for their infant and provide a potentially dangerous sleep environment." She adds that the soft sides "will not protect an infant from being rolled over onto or accidentally smothered by another adult" and is firm in stating that babies should always sleep on a separate sleep surface.

Still, after many sleepless nights filled with rocking our little one to sleep, only to have her eyes pop open the second we set her down in the bassinet, I was ready to try anything to get her to sleep and stay asleep.

Several mom friends of mine are proud owners of the DockATot, and they were quick to sing its praises when I asked for advice. “I bought it and never looked back,” one friend told me, explaining that her 6-month-old loves being close to his parents and sleeps soundly through the night.

Another friend described her 3-month-old as the “best sleeper ever” — especially compared to her toddler — and she was convinced that the DockATot was the reason why.

For a few more weeks, I agonized over whether or not to purchase one. They're not cheap; the Deluxe+ size (for infants 0 to 8 months) runs between $175 and $200, and the Grand, which is designed for babies 9 to 36 months old, maxes out at $300. It seemed like a lot of money to spend on what is essentially a glorified pillow. I looked at other similar products, like the SwaddleMe By Your Side co-sleeper by Summer Infant, or the SnuggleNest by Baby Delight, but neither had the impressive reviews that the DockAtTot boasts.

The very first night we used the DockATot, our baby — who was eight-weeks-old at the time — slept through the night. Yes. All. Night. Long.

The other thing that gave me pause was safety. The DockATot’s website offers some comfort; their safety page claims that the cover’s material is 100% breathable. And while bed-sharing is associated with an increased risk of SIDS, the DockATot’s website claims that the products are safe for bed-sharing arrangements, when used correctly. "The founder is a passionate bed-sharer," states the site, and, when used "in an adult bed properly" claims it is "safe for co-sleeping." Still, it's not categorized as a bassinet or co-sleeper, which means it is technically an unregulated sleep product — there are several articles online that question the DockATot’s claim that the material is "breathable." Its popularity certainly has a lot to do with its utility while the baby is awake, when you might otherwise use a Rock 'n' Play or other non-sleep-regulated product without issue. And therein is the tricky part: Parents love it during the day, when everyone agrees it is safe and helpful, and wind up becoming attached to it at night, when experts do not condone its use.

I circled back with my Dock-owning friends, asking them if they were nervous while using it at night. Both of my friends admitted to feeling uneasy at first, but they grew more confident with use, and thoroughly believe that it’s a safe product.

After reading so much conflicting information, I felt overwhelmed on top of being sleep-deprived. I’d gone back and forth in my head a dozen times, asking my husband on a daily basis if he thought we should order one. And after one particularly challenging Saturday night where our baby was awake every 30 minutes, we decided to try it.

The very first night we used the DockATot, our baby — who was eight-weeks-old at the time — slept through the night. Yes. All. Night. Long. The next morning, my husband and I both turned to each other, asking: “Wait, did you get up with her last night?” We couldn’t believe it when each of us answered “no.”

Since that first time, our daughter has slept peacefully every night — although I will admit I still pick her up for a middle-of-the-night feeding or two, just to make sure she’s getting enough. But she often stays asleep during those dream feeds, going right back down soundly. My husband and I keep the DockATot between us in our king-sized bed, making sure to keep our comforter tucked tightly underneath so it doesn’t creep up over her body. During the day, she naps in her Dock in the living room, and has even started to fall asleep on her own when placed inside it.

Like anything, it has pros and cons. Obviously the huge benefit for us has been the added sleep and the peace of mind that comes with having our baby within arms’ reach. It’s nice to be able to glance over at her and see that she’s sleeping (and breathing), and then drift right back off to sleep myself. And I’m sure she enjoys having both of her parents close by for comfort if she needs it.

Ultimately, I’ve become one of those moms who will sing the DockATot’s praises. I know that there are some moms out there who will point to the safe-sleep rulebook and tell me that I’m putting our baby at risk.

The cons? Everything about the DockATot is expensive — from the covers (which range between $75 to $95 a pop) to the cute accessories. The Dock itself has to be cleaned and aired out frequently, which is tough when your little one just wants to spend most of her free time lounging in it (and now won't nap anywhere else). And I’m willing to bet that weaning a baby from the DockATot is no picnic when it comes time for the crib — but we’ll cross that bridge later, I suppose.

Ultimately, I’ve become one of those moms who will sing the DockATot’s praises to anyone who asks. I’ve sent referral coupons to all of my friends, and, if the day should ever come to have another baby, I plan on using the Dock right from the start. I know that there are some moms out there who will judge me, who will point to the safe-sleep rulebook and tell me that I’m putting our baby at risk.

But at the end of the day, it’s important to factor in everything when making decisions about a baby — and that includes the risks that come with fatigued parents, and what might be best for your baby, with their unique needs. There’s a reason why babies don't come with an instruction manual; we have to figure it out as we go and do the best we can. So, with that: I’m going with my gut, and I’m also sleeping six or seven hours a night again. For us, it's a win.

More Like This
Should You Swaddle Your Baby In The Summer? Here’s How To Dress Them
The Euphoric Terror Of Rollerskating Was Exactly What I Needed
Why It's Crucial to Get Good Sleep As A New Mom — Plus, Tips On How To Do It
New Infant Safe Sleep Guidelines From The AAP Discourage Bed-Sharing