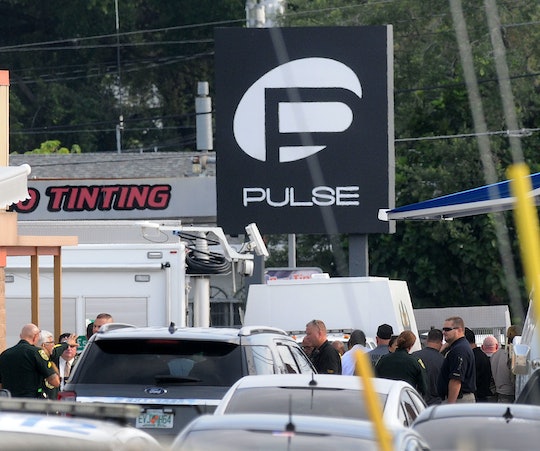 Eyewitness Accounts Of The Orlando Nightclub Shooting Are Chilling

After a fatal mass shooting at Pulse, a gay club, early Sunday morning, eyewitness accounts of the Orlando nightclub shooting have begun to emerge, and they are harrowing. The shooting began around 2 a.m., according to CNN, and resulted in at least 50 fatalities and 50 people wounded. Orlando Police Chief John Mina said police shot and killed the gunman, and the shooting is being treated as an act of terrorism, with the FBI involved.

According to Reuters, a police officer working a security shift at the nightclub opened fire on the shooter, which resulted in a hostage situation. Mina said Sunday that the gunman was carrying an assault rifle, a handgun, and a "device" that authorities haven't yet identified. Shortly after the first police officer exchanged fire with him, police began hearing from people inside the club. At around 5 a.m., officers entered the club and fatally shot the gunman. Reuters reported that it was unclear when he had shot those killed and wounded.

Since the shooting, those who were inside the club at the time have given their accounts of what it was like to be inside during the terrifying events at Pulse. Christopher Hansen, a patron who was inside the club, said afterwards that the gunshots came "just one after another after another. It could have lasted a whole song," according to CNN. USA Today reported that Hansen also described the scene at Pulse on a live video taken by Orlando Sentinel reporter Christal Hayes:

Bang! Bang! Screaming. And loud noises. The guy next to me was shot ... when I turned around to look everyone was falling and dropping and screaming

Hansen told Hayes that he was actually relieved by the sound of gunshots:

I just know when you hear the bang you're not shot, so I knew I was OK at that particular moment. I didn't know how long it would last.

According to Reuters, 53-year-old Javer Antonetti was also at Pulse and told The Orlando Sentinel, "There were so many (shots), at least 40... I saw two guys and it was constant, like 'pow, pow, pow'."

Anthony Torres, his sister, and some friends got up to leave right before the shooting started, he posted on his Facebook page:

It just hit me that I could have lost my sister Maria Torres My BF Alfredo Chavarria, Daisy Ivy Carballo, Dana Weigle Cole and Joey Kijo.. We were sitting in the VIP section right by the entrance.. We decided to get up and leave ... Not even a few seconds later is when it all started.. People where screaming and running looking for their loved ones along with seeing injured people sitting on the floor .. It was so surreal .. it seemed fake... This had to be planned...

They are just pulling people out in stretchers loading them up.. Omg please god let everyone make it - tonight was supposed to be a fun night!! One more minute and we would of been shot or worse.. Thank god we got to our car in time ..

Some patrons tweeted that they were hiding in the bathroom:

As USA Today noted, the Orlando police department is asking all witnesses to come to police headquarters at 100 S. Hughey Ave.