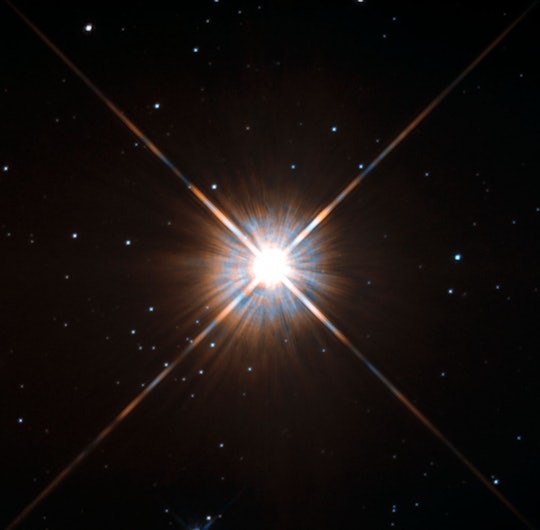 Pack your bags — anybody who's anybody is going to be traveling to the hottest spot in the universe really soon. And when I say the hottest spot in the universe, I literally mean the universe. Astronomers at the European Southern Observatory (ESO) have discovered a planet orbiting neighboring Proxima Centauri, which is the closest star to our sun. The exo-planet, called Proxima Centauri b or Proxima b, orbits in Proxima Centauri's habitable zone. This means it has both the potential to host liquid water on its surface and the potential to be your new home! It's only about 40 trillion kilometers away with an estimated travel time of tens of thousands of years, so make sure you pack a lot of books for the journey. So if you're nervous about the state of our country at present and looking to start a new life on this trendy exo planet, there are a few facts about Proxima Centauri b that you should know before moving there next year.

Moving to Canada if your presidential candidate of choice doesn't get elected is so 2012. Canada is probably overflowing with Mitt Romney supporters, so it's time to find a new political escape. Proxima b is the perfect choice. It's temperature without an atmosphere is thought to be around -40° C. Sure, Earth's average temperature without the greenhouse effect is only -15°. But so what? It's cold. Throw on a parka and get to work destroying the environment!

Humans have an excellent track record of warming their environment and changing the natural climate of their planet. Anything is possible if you work hard enough, so don't write Proxima b off just yet because it's a little chilly. If Proxima b has enough CO2 or other greenhouse gases in the air it could have a mild temperature. Bring a bathing suit with you just in case.

Proxima b's parent star, Proxima Centauri, is actually one part of a stellar trio (much more classy than the Just Okay Trio). Together the three stars are known as Alpha Centauri, which is the third-brightest star in the sky. Alpha Centauri is easily visible to observers on Earth without a telescope, however, Proxima Centauri is too small and too dim to view with the naked eye. Proxima is pretty far away from the two other stars that help make up Alpha Centauri. It's about 0.1 light years or a trillion kilometers away, so it's a bit of a lonely star out there in space. This isolation made it a little bit harder to find the exo-planet hiding in it's orbit. If you're looking to run away from your problems, the difficult to reach Proxima b could be a great fit for you. Many think Ryan Lochte should sign an endorsement deal with the new planet after his robbery debacle in Rio.

Proxima Centauri, while impossible to see from Earth's surface, is actually the closest star to our sun. This means that Proxima b is possibly the closest potential home for life outside our solar system. At just 4.2 light years away, it's close enough for your in-laws to see through a pair of strong binoculars but far enough away that they can't drop in on Saturday morning unannounced.

Last, but certainly not least, is location. When considering any interplanetary move, all seasoned realtors will tell you it's all about location, location, location. Proxima b has one of the best locations in the universe, hands down. It exists right in the middle of Proxima Centauri's habitable zone, making it possible for liquid water to theoretically exist on the planet. Proxima's habitable zone is extremely close to it's parent star and is also relatively tiny.

Scientists used to think that red dwarf stars like Proxima couldn't host habitable planets that were orbiting their parent stars so closely, but Proxima b proved them wrong. (If life exists on Proxima b, let's hope the alien life forms are more of the Ryan Gosling-kidnapping variety than the Kate McKinnon-kidnapping variety.)

There aren't rocket ship shuttles to Proxima b just yet, but hopefully NASA figures something out before the election in November. I'm going to need a plan b if President Trump becomes an Earthly reality.