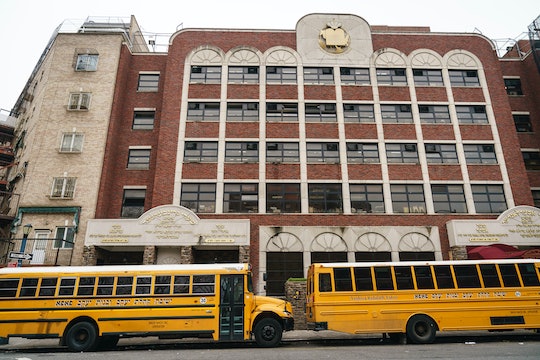 As the number of measles cases in the United States continues to grow, two schools in Brooklyn, New York were forced to close Monday after failing to comply with a measles mandate enforced by New York City health officials. The closures are important because this measure sends the message that New York is taking the outbreak in Brooklyn and Queens (423 confirmed cases, per the Centers for Disease and Control Prevention) very seriously.

Back in December 2018, 39 cases of measles were reported among the Orthodox Jewish communities in Brooklyn's Williamsburg and Borough Park neighborhoods, according to NBC New York. The bulk of cases involved children and the illness was reportedly spread by an unvaccinated child who recently returned home from a trip to Israel, according to The New York Times.

Given the high number of cases, the New York City Department of Health decided to issue a measles mandate for certain Jewish schools in the affected areas. Students had to get vaccinated with the required number of doses of measles-mumps-rubella vaccine before they could return to school, otherwise they had to wait until the outbreak is declared over, according to ABC7 Eyewitness News.

Most notably, the regulation applied to children with an approved religious or medical exemption to measles immunization.

Despite the regulation, "there have been 423 confirmed cases of measles in Brooklyn and Queens since October," according to the CDC. The staggering number comes after health officials issued mandatory measles, mumps and rubella (MMR) vaccinations for people living in the following zip codes, according to the CDC:

In response to the continuing spike in numbers, the city closed the Tiferes Bnos and Talmud Tora D’Nitra schools on Monday for failing to "comply with the health commissioner’s emergency order to keep unvaccinated children away," according to CBS New York.

“Schools that continue to disregard our direction during the outbreak will be closed down until they can prove to the Health Department that they will comply,” Health Commissioner Dr. Oxiris Barbot said in a statement, according to the New York Post.

He added: “The reality is, the longer it takes schools and individuals to comply with our Order, the longer this outbreak will continue."

The health department had previously closed down five schools, but the institutions were reopened after submitting corrective action plans that addressed the "lapses in compliance."

I think we see some good signs, but we are far from out of the woods. We’ve made it clear how serious this situation is. On the good news side though, we have twice as many children vaccinated this… last few months than we had in the same period last year. So that is a step in the right direction.

De Blasio is right that more New Yorkers are vaccinated — as of April 28, "21,284 doses of the MMR vaccine have been administered to people who are under 19 years old in Williamsburg and Borough Park since October," according to the CDC.

Despite these gains, much more has to be done to ensure these communities are safe, which includes MMR vaccinations and following health officials' guidelines.