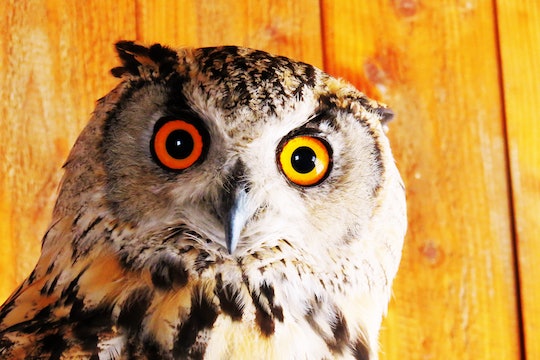 The question of whether or not to buy a real Christmas tree comes up a whole lot this time of year. I tend to land heavily on the real tree side of things, but maybe I'm about to change my mind because a Georgia family found an owl in their Christmas tree — yes, an owl — and this is the most chilling, yet entertaining story I've heard in awhile.

Katie McBride-Newman of Atlanta along with her husband Billy and two kids, India and Jack, were surprised to find an Eastern screech owl hiding in their Christmas tree recently. Especially since the Newnan Herald-Times reported that they had put up their tree a week earlier, meaning that owl was presumably hiding in the tree for an entire week watching this family. Spooky.

Although to be fair, McBride-Newman didn't think it was spooky at all. As she explained to CNN, she is actually a big fan of owls and has some owl ornaments on her Christmas tree, which was perhaps why her 10-year-old daughter India was confused when she found the owl in the tree. "She comes very dramatically into the dining room and goes, 'Mama, that ornament scared me.' Then she bursts into tears," McBride-Newman told CNN.

The mom of two also shared several photos of the owl in her Christmas tree on Facebook — apparently he is in no rush to leave.

McBride-Newman explained on Facebook that the family has tried several times to encourage the owl to leave, but it's just not happening. In fact, a recent attempt saw the owl find a significant new perch on the tree.

"Last night we shut all the interior doors, turned off all the lights and came to initiate owl removal — and he was NO WHERE to be found. Gulp," McBride-Newman wrote on Facebook. "So we opened the double doors by the tree wide and went to bed. At 1:30am, Billy came out to check, and was roosting on the tip top of the STAR."

While it is not unheard of to find an animal in your fresh Christmas tree, it is still pretty uncommon. And in the case of McBride-Newman, a wildlife technician did eventually come to remove the owl safely. She credited the owl on Facebook with "making the magic & mystery of advent come alive in our home, and for inspiring connection among all who followed the adventure."